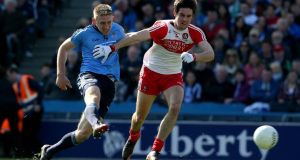 Dublin’s Eoghan O’Gara gets his shot away despite the attention of Derry’s with Chrissy McKaigue during the Allianz Football League Division One Final at Croke Park. Photograph: Donall Farmer/Inpho

Dublin 3-19 Derry 1-10: Despite the briefest of suggestions through an early goal that the script for this afternoon’s Allianz Football League Division One final might contain some element of twist, holders Dublin powered to the county’s first successful defence of a league title at Croke Park.

Although the winners went through a slipshod phase in the second half when the urgency had seeped out of their task, they finished strongly with goals from Kevin McManamon (57th minute) and Diarmuid Connolly at the very end to rack up an impressive 15-point win.

Derry staked their challenge on crowding the approaches to goal and leaving a minimal presence up front and they received initial encouragement. After Bernard Brogan had kicked Dublin ahead with a third-minute free, the challengers struck back for a goal.

Emmett McGuckin did the initial work running at Rory O’Carroll before teeing up a fisted pass across goal for Cailean O’Boyle to finish to the net.

Any notion that this would set up a contest was steadily dispelled by a succession of points and James McCarthy was nearly in for a goal in the seventh minute.

Bernard Brogan, the TG4 Man of the Match, kicked three frees and the same number from play for a total of 1-6. Eoghan O’Gara was a constant threat with his ability to hold up ball, frequently one handed, giving Derry’s full back Chrissy McKaigue a difficult time.

With Derry leaving just McGuckin and O’Boyle up front and pulling everyone back deep, Dublin had the opportunity to press forward relentlessly and Jonny Cooper, who did a good job on Derry’s captain Mark Lynch, one of the best forwards in the league campaign to date, frequently found himself in such advanced positions that he was able to kick a point and act almost as a link man in attack.

It took until the 27th minute before Derry managed to add to their early goal. By then Dublin had 10 points on the board, scores flowing from O’Gara, Connolly, Paul Flynn, and a Cluxton free.

Whatever ambitions Derry had for damage limitation their formation wasn’t designed to chase a match and although they added a couple of points to the total either side of half-time – the interval lead was 0-13 to 1-3 – the match was irretrievably gone.

They didn’t give up pressing and Gerard O’Kane came up to score a couple of points and Lynch did likewise, his first a crack at goal that flew over, and had a shot saved by Cluxton in the 46th minute.

By that stage Bernard Brogan had hit Dublin’s first goal, a shot hit with such power that it came back off the goal stanchion and into play.

The wides’ total however began to mount (12 in the second half for a total of 17 against their opponents’ three) and the match settled into its own futile rhythm with Derry gamely attacking for returns that were too small to have any impact.

McManamon’s goal was a reward for perseverance – his shot at goal parried by ‘keeper Thomas Mallon, allowing him hurtle in on the rebound to get a touch to the net for 2-17 to 1-8.

O’Kane had an attempt stopped on the line by Nicky Devereux but on a day when Derry were denied even limited consolations Dublin finished with a flourish, scoring 1-2 without reply in the last couple of minutes.