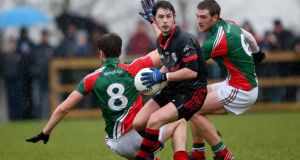 Alan Freeman came to Mayo’s rescue with a late goal from the penalty spot to earn a share of the spoils in this Connacht League match at Bekan, Ballyhaunis yesterday.

Freeman’s finish was Mayo’s only score in the second half of a game played in dreadful conditions as the students from Sligo took full advantage of the elements.

They led by three points, having trailed at one stage in the first half by 1-6 to 0-1.

A Cathal Carolan goal, along with points from Darren Coen, Brian Gallagher, Kevin McLoughlin, and two frees from Coen, saw Mayo control the opening 20 minutes before Niall Walsh found the net for the Sligo students who trailed 1-4 to 1-8 at the interval.