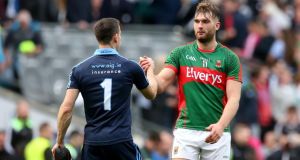 By the end, Aidan O’Shea had earned the ultimate accolade. Booed and scorned by the Hill, their dudgeon high after the latest collision between himself and Philly McMahon. The Dublin corner back took a while to dust himself down and the next time O’Shea’s face flashed up on the screen he got the bird and then some. Public enemy number one.

His popularity won’t have improved any by the time the replay rolls around, with his confirmation to journalists that McMahon head-butted him during one their numerous skirmishes. “Yeah, I was head-butted alright,” he said. “But sure that is not for me to enforce the rules of the game; but there was plenty of more things out there that the referee missed too.”

To be clear, O’Shea wasn’t going looking for trouble with his interview afterwards. He gave a matter-of-fact answer to a direct question – after all, he couldn’t exactly claim he hadn’t seen the incident. When the incident happened, he didn’t go down clutching his face or seek to make anything of it. It would have been out of kilter with the sort of battle he and McMahon had.

In the final reckoning, O’Shea didn’t get on the scoresheet. He had a direct impact on six Mayo points – fouled for three Cillian O’Connor frees, the final pass for points by Keith Higgins and Lee Keegan and the penultimate one for Andy Moran’s equaliser. On the face of it, that’s just about level par for the Dublin defence, especially since they lost Rory O’Carroll so early in the game. But O’Shea was seldom less than a menace here.

Mayo’s main issue in the opening half was their failure to give him any useful support. O’Shea isn’t just a wrecking ball, he’s an excavator. His ability to dig possession out of the most unlikely circumstances turns even the most ragged delivery into a 50/50 ball.

In the first half, Mayo sent six high balls down in his direction in front of the Hill. He caught four of them.

Dublin fouled him twice, O’Shea overcarried twice. Cillian O’Connor kicked the two Mayo frees, Dublin breathed a roar of relief for both of theirs. And not without reason – for the first, O’Shea kicked a point as the whistle blew; for the second, he thought he’d earned a penalty. Both calls were in the eye of the bewhistler and when Joe McQuillan pointed away from goal, the noise pushed the needle into red.

Second half. Mayo chasing the game and O’Shea bouncing off bodies all over the place. Off the ball, he gave and he took. Noel Connelly confirmed afterwards that the Mayo sideline had asked the officials to keep an eye out for fouls on him away from the action and indeed the first O’Connor free of the second half came from exactly such a scenario.

But as the tide started to go out on Mayo, so O’Shea’s influence lessened. If he spent the first half making silk purses out of sows’ ears, even that raw material wasn’t available after the break. He started to drift further from goal and soon after Kevin McManamon’s goal, he crashed into Denis Bastick and came off the worse for the challenge.

As he sat winded on the ground, Bernard Brogan pushed Dublin into a five-point lead. When Alan Brogan and Jack McCaffrey followed up to push it out to seven, O’Shea was hangdog. McMahon hadn’t crossed midfield all day but now he was of a mood to sally forward and get involved. It was symbolic almost, as though O’Shea’s statue had been toppled.

But back came Mayo and back came O’Shea, with a hand on two of Mayo’s remaining points - most crucially the equaliser. All in all, he gave the Dubs much to boo him for. He’ll happily take the same fate next Saturday.