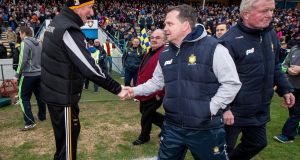 Kilkenny and Wexford managers Brian Cody and Davy Fitzgerald will renew rivalries at Nowlan Park in the Division One quarter-final. Photograph: Inpho

Laois v Kerry, Portlaoise – Laois haven’t beaten Kerry since 2013 and have lost the last three straight, by seven, 11- and four-points respectively. Quite why Laois should be 8/15 favourites here is a mystery. Verdict: Kerry

Kilkenny v Wexford, Nowlan Park, 4.0 (Deferred coverage, TG4) – Wheels within wheels here. Everyone is going to start off wondering what we’re watching and we won’t know it before we see it. Wexford surely won’t take a dive but with a summer date against Kilkenny a few months away, can they hold at least a little bit back? Would it even be worth it if they could?

All logic suggests they will have a serious go, in which case small victories could be sufficient. They haven’t got within 11 points of Kilkenny since 2011 and haven’t hit the 20-point mark themselves since 2004. End the day having beaten both of those marks and they’ll have made a credible step forward. Anything else is bonus territory. Verdict: Kilkenny

Cork v Limerick, Páirc Uí Rinn, 4.0– Limerick must despise this time of year by now. They’ve scored more goals in the 2017 league than Cork, Kilkenny and Waterford combined but it was still as good as over on February 12th when they lost in Wexford. And whatever regathering they’ve done since then must have felt fairly hollow last Sunday night after they could only manage five points with the wind behind them in the second half on the way to losing in Galway.

They travel to play a Cork side on the up. It was a deadish rubber last week against Tipp but it still did them good to come through it, better than it would have done Tipp at any rate. Limerick haven’t beaten Cork in the league since 1994 and it’s hard to see them changing that here. Verdict: Cork

Galway v Waterford, Pearse Stadium, 4.0 (Live, TG4) – Off all the games that might, at a stretch, see the use of the new on-the-day extra-time rules, this certainly looks the one with the most potential. At least it would if we could be sure both sides were of a mind to keep their league going as while more. Let’s just say it wouldn’t be a huge surprise if the stewards turned out to have a few questions for the trainers afterwards.

Joe Canning was back in good fettle last week but it was the performance of David Burke that drew the rave notices with six points from play from midfield. Like Waterford and Clare before them, Galway could take a notion here and set about winning the league from Division 1B. With Waterford’s interest in another league title at least debateable, the home side could be the shout here. Verdict: Galway

Offaly v Tipperary, Tullamore, 4.0– Never mind the skinning Offaly are going to get here – the win over Kerry last week wasn’t just important for staying out of the relegation skirmishes over the coming weeks. Hard and all as it may be to swallow, a rivalry with Kerry is where Offaly are at these days and there’s every chance they will have to beat them to make a Leinster quarter-final. Even with this dubious reward, it was a good day’s work. Verdict: Tipperary

Clare v Dublin, Cusack Park, 4.0 – Probably the game of the weekend. Relegation is no disaster, at least while the league has its current structure. But losing the first game of the year that you absolutely, positively have to win is no way to enter the summer. Dublin have a bit more about them than looked to be the case in early February but the home side ought to be able to get its act together. Verdict: Clare