GAA statistics: More handpassing in Gaelic games than in rugby 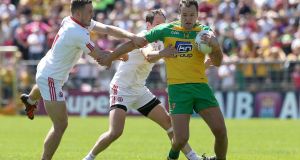 There were 412 hand passes recorded in the Ulster football final last Sunday between Donegal and Tyrone. Photograph: Lorraine O’Sullivan/Inpho

Handpassing is dominating the modern game of Gaelic football to such an extent that players are now passing with their hands more often than rugby players do so.

Over a 70 minute game of Gaelic football there are higher hand pass counts being recorded than the number of balls thrown in an 80 minute rugby match. It all emphasises the importance of breaking the tackle, peripheral vision and the ability to layoff in contact as necessary skills an intercounty Gaelic footballer needs in his artillery as the game continues to evolve.

There was plenty of furore over the handpass-fest that ensued during the drawn Connacht final between Galway and Roscommon earlier this month when 474 handpasses were recorded. That is 143 more passes via the hands than in Ireland’s first Test victory over South Africa last month.

But while that provincial final featured a particularly high handpass count, it’s now commonplace for GAA games to outdo the rugby when it comes to the number of passes made via players’ hands.

During this season’s Pro12 final between Connacht and Leinster there were 469 passes, in one of the rugby year’s best spectacles. Both teams looked to run the ball as often as possible, in near perfect conditions.

Yet there were still less passes via the hand made than in the drawn Connacht final, even with 10 minutes fewer being played in the GAA.

While in Ireland’s historic first Test victory over South Africa, there were just 331 passes made. And when you deduct those recorded in the final 10 minutes there were just 263.

In the Ulster football final last Sunday between Donegal and Tyrone there were 184 recorded in the first 35 minutes alone, and over the 70 minutes there were 412.

These are stats to turn the stomach of GAA catch-and-kick traditionalists. But even Kerry – the ultimate purists – recorded 158 handpasses in the Munster final win over Tipperary. In a game they won with relative ease in the end, and by no means facing a blanket defence either – in all there were 333 handpasses calculated in that match.

Against an opposition two divisions below them, an unusually open second half actually broke into a mainly kick-passing based encounter.

There were 205 kicks recorded in that game (although 41 were kickouts), 33 more than in last weekend’s Ulster decider.

Minus restarts in the GAA matches, and penalty attempts at the posts in the rugby, there were 164 kicks in the Munster final, and 126 in the Ulster final. There were 79 in the Irish rugby team’s win over South Africa and 59 in the Pro12 finale. So of course there were more kicks in the GAA games, where there is no offside line and players are generally required to kick the ball to score – but not as much of a difference as one might expect.

For all the flak that handpassing within the GAA gets though, it’s never been more prevalent and it is certainly not going away.

One misconception made about handpassing is that it does not require any skill to execute.

For years teams in Munster have mastered the long fist pass, now crucial in allowing teams to quickly switch the play and drag and pull a defensive sweeper. While the soft hands of Ulster teams running various angles, hard and fast has brought the likes of Tyrone and Armagh, and Donegal great success. It’s no surprise that most teams in the country are practising more hand-passing drills than foot-passing ones.

One of the newer crossovers from the rugby pass to the GAA handpass, is the pop pass. A lateral weighted pass to allow for a runner to break the tackle. And with that, the first line of the blanket defence.

Of Donegal’s 263 handpasses in the Ulster final, 40 per cent were sideways as they played keep ball across the pitch inviting that pop ball for angled runners from behind. Generally then, after breaking that tackle and confronted by the next, or during the contact of the first tackle, another key skill set on show in this year’s provincial finals has been the layoff in the tackle. With timing and peripheral vision key to both.

From the second half throw-in during the Ulster final Michael Murphy caught the ball, broke the tackle, drew in the attentions of four Tyrone men and, after withstanding a tackle, he simultaneously handpassed to Paddy McBrearty for a score.

Similarly Seán Cavanagh took the attentions of four men before flicking a pass back to Peter Harte for a key Tyrone point in the 40th minute.

And while Cavanagh, Murphy and the Aidan O’Sheas have the power to break numerous tackles, it’s the fleet footedness and awareness of the likes of Ryan McHugh to tee up those situations. Many of which are pre-rehearsed moves.

So as much as we love, the high catch, curling shots and chip pick-ups, there’s no getting away from the fact that our game is now every bit or more about the hands than it is the feet.

Albeit a very different game, the fast, weighted hands, peripheral vision, awareness of pre-rehearsed moves and the long hand pass of a rugby player are now all equally important in a modern GAA player’s skill set.