Talents of David Givney, Michael Argue and Seánie Johnston all being wasted 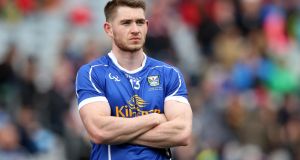 On paper Cavan’s attack looks menacing. A David Givney and Michael Argue full forward line puppeteered by Seánie Johnston should give a well organised defensive team the perfect attacking outlet to push on and compete in Ulster this summer.

Yet sideways passing makes for dormant twin towers. Argue is 6ft 4 inches with Givney not far below him, but with Cavan’s insistence on sideways and backwards handpassing they are nothing more than scarecrow attackers in Terry Hyland’s team.

In Cavan’s last competitive outing – the Division Two final defeat to Tyrone – Hyland opted for Givney, Argue and Johnston inside on the team programme.

Cavan though lined out with Argue floating out as a third midfielder or into an unorthodox right half forward role, Johnston occupied the other side of the attack slightly closer to goals – with Givney an isolated and unused figure at the edge of the square.

Nonetheless he managed three assists, scored a point and was inches off with another effort. The former DIT student has shown in the past as a midfielder, particularly during the Sigerson Cup, that he is among the finest fielders of a ball in the country. Alongside him Argue is one of the country’s most promising young midfielders – both have no shortage of ability and finesse on the ball, allowing for their easy adaption to an attacking role. 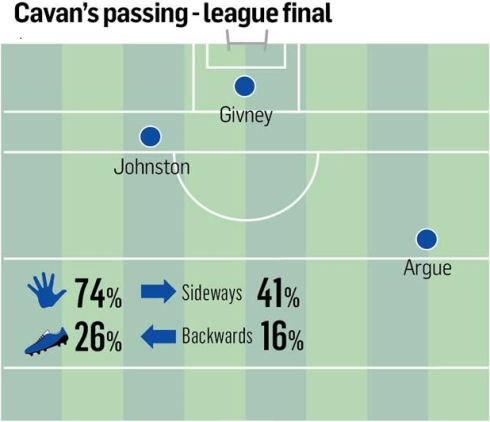 Before being taken off on 51 minutes in that league final defeat – Argue had 16 involvements. Four came in his own half, another five outside the Tyrone 45. All were on the right hand side of the field, and despite an excellent point, a turnover, contesting a kickout and some neat interplay – he was largely on the periphery of the game.

Yet, in comparison to the wasted Givney, he was in the thick of it. For all three of Givney’s assists he drifted out to the edge of the D, likewise with his point. He dropped into Cavan’s handpassing movement at this stage itching to be involved in the action. In all there were just seven balls kicked in around him in the entire game – two of which were speculative shots which he tried to get under, one pass went over his head, and two never made it past the sweeper in front of him.

Only twice in the game was he accurately found with a kickpass, and not once was he tested with a high, diagonal, early ball.

Such was Cavan’s reliance on their possession based strategy that with just seconds left in the first half against Mickey Harte’s team, when allowed one more attack by the referee, they would spend the next 40 seconds twice working the ball inside the opposition 21, and twice working it back out. The referee eventually brought the half to an end with full back Killian Clarke collecting a backwards kick between the half way line and Tyrone 45.

It wasn’t until round four of the league that Cavan started with the little and large trio inside – at which stage they’d already lost two of their opening three games .

In their final five games though they averaged 1-18 – with Givney, Argue and Johnston combining for 6-17. They won all of those games and earned promotion. A fine achievement for a young team seemingly coming of age – having absolutely dominated Ulster at Under-21 in recent years.

In the three games which sandwich that run though, including the final defeat, the team averaged only 0-12 per game. With the talented trio averaging just 0-2.

That inconsistency highlights the potential of this Cavan team, and the reality of their recent seasons. In two of the last three Ulster campaigns they’ve been edged out by a point, with their scoring average in those three defeats again being 0-12.

In contrast some of the tallies they’ve racked up during the league have shown that there’s certainly way more in this Cavan team.

The question is will they abandon their utter dependence on possession based football and back their talent?