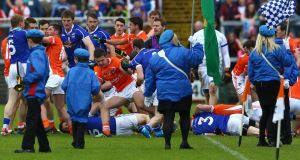 The embarrassing scenes erupted when a dispute arose over which team should be nearer to the crowd, with Armagh maintaining that protocol dictated they as the home side should have that position but Cavan arguing that their county flag was already on that side.

In the melee that followed, Cavan’s All Star-nominated forward Martin Dunne broke his hand and played no role in the match. The scenes were broadcast on television on Sunday night and have drawn widespread criticism.

There has been claim and counter-claim from the two counties and the GAA’s Central Competitions Control Committee will assess the evidence this week.

There is concern amongst officials that it may prove difficult to hand down adequate punishment because although “contributing to melee” is a red-card offence, the GAA’s Central Hearings Committee has been reluctant in the past to hand down suspensions unless more serious infractions such as striking and kicking are shown to have taken place.

Although most of the footage seen on television is of wrestling and brawling, there is also video of a spectator hitting Cavan’s Fergal Flanagan and that will be considered. It remains to be seen whether additional footage will surface to give a fuller picture of events.

“It was shocking to be honest, seeing the scenes,” was the reaction of Tyrone captain Seán Cavanagh yesterday. “It’s silly from the players’ and teams’ point of view. I don’t know if it was premeditated or not but the tradition of the GAA is that you walk the parade, and sometimes as a player, you’d wonder what the benefit is.

“To me, it’s part of the tradition of the GAA and I grew up watching it at big matches in Clones and it just was one of those things you do on a big day with the Artane or whatever boys’ band is playing. I think it was nonsense what went on and I’ve no doubt Croke Park will come down and issue sanctions.”

Protocols He spoke of his own experience leading Tyrone around in the home championship match against Down, saying that he hadn’t been aware of any protocols that the home team needed to be on the crowd side.

“I had to do it the first day out against Down and I genuinely didn’t know where to go. It actually isn’t communicated what side you’re supposed to walk on, because I remember having to ask one of the officials whether it was inside or outside.

Opposing Cavanagh at the weekend will be Monaghan’s Dick Clerkin, who defended the pre-match parade, a formality that takes place only in Ulster for all championship matches.

“I didn’t realise that. Personally I think parades are a nice tradition to have . . . It’s disappointing obviously what happened yesterday but I don’t think from one incident should you have to reassess a whole tradition.”