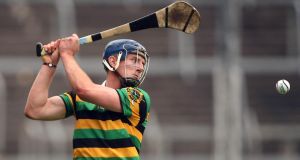 Kerry SHC Final Replay – Lixnaw v Kilmoyley, Austin Stack Park, 4.0 - The drawn encounter was overshadowed by the attack on Paul Galvin by a Kilmoyley official. This time around, Lixnaw have the edge, as Kilmoyley’s county centrefielder Paudie O’Connor has picked up a cruciate injury.

Cavan SFC Final – Cavan Gaels v Kingscourt, Kingspan Breffni Park, 4.0 - These clubs were last champions in 2011 and ‘10 respectively and with equal symmetry have lost the last two finals between them. Cavan Gaels, managed by Peter Canavan, will hope to give a better display than last year when upset by Ballinagh.

Kingscourt manager Niall Lynch was in charge of the Mullahoran team that beat them in the 2012 final but has led Kingscourt through a tough campaign, including past champions Ballinagh. The Gaels, with Declan Meehan in form up front – 2-4 on his last outing – get the vote.

Carlow SFC Final – Rathvilly v Old Leighlin, Dr. Cullen Park, 3.45 - Old Leighlin are aiming for a fourth title in five years. Twelve months ago they accounted for tomorrow’s opponents Rathvilly and coincidentally both finalists comfortably accounted for the semi-final challenge of 14-man opponents Tinryland and Palatine respectively. The holders can retain their title.

Clare SFC Final – Cratloe v Éire Óg, Cusack Park, 3.30 - After last week’s first senior hurling championship victory, Cratloe look to defend their football title and win a first double. Most of the players are the same but there is a notable exception in Limerick’s great centrefielder John Galvin, whose prowess in the air isn’t ironically greatly suited by the team’s practised short game. At full forward though he gives them options and although their Ennis opponents are an exciting young team in an unusual county final pairing, neither club being from the football heartland in the west, the double looks on.

Limerick SFC Final – Ballylanders v St Patrick’s, Newcastlewest, 1.30 - A bit of novelty attends the Limerick final. Ballylanders won most recently seven years ago and sprang a surprise on four-in-a-row chasing Drom-Broadford but St Pat’s have to go back 10 times as long for their last title in 1954. they too were surprise winners in the semi-final, beating Fr Casey’s. Not much in it but the St Pat’s attack can swing it.

Offaly SFC Final – Edenderry v Rhode, O’Connor Park, 3.30pm - Rhode will be hoping to get another crack at the Leinster championship that they’ve haven’t managed to win so far and whereas it would be a mistake to write off Edenderry who were champions three years ago, they were also comfortably beaten by Rhode in last year’s semi-finals and don’t look to have closed that gap in the past 12 months.

Cork SHC Final – Glen Rovers v Sarsfields, Páirc Uí Chaoimh, 3.30 - A repeat of the 2010 final sees the Glen still empty-handed since 1989 –a fact to be underlined tomorrow when that team, which beat Sars in the final,is commemorated on their 25th anniversary. Glen Rovers’ Patrick Horgan has been subdued in recent matches and although the team survived it’s hard to see them having a real shot at this without their top marksman hitting decent form.

Beaten last year by Midleton and Conor Lehane (mostly the latter), Sarsfields will have plenty of motivation to maintain their even-year domination, which goes back to 2008. They have a potentially formidable centrefield in former Wexford hurler Eoin Quigley and Cork’s Daniel Kearney and hope to have Michael Cussen’s lighthouse presence restored to the team after injury. This could be extremely close. Given that Horgan has room for improvement and the continuing good form of Stephen McDonnell at the back, the Glen might be able to seize the day and upset the odds.

Mayo SHC Final – Tooreen v Ballyhaunis, Tooreen, 2.0 - Tooreen sprang a surprise last year when after losing four finals in five years to their rivals they gave Ballyhaunis’s six-in-a-row ambitions a drubbing. Keith Higgins will be able to play this year however and the challengers can win a tight contest.

Meath SHC Final – Trim v Kiltale, Páirc Tailteann, 3.30 - Having been a force through the 1990s, Trim are looking for a first title in 13 years. Both sides are unbeaten but Kiltale are favoured to make it two wins in three years.