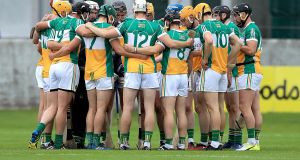 Offaly have struggled in recent years to make an impression either at senior level or at underage. Photograph: Donall Farmer/Inpho

Murphy, who is the Tipperary hurling team doctor, was in Croke Park for the launch of the National Concusssion Symposium.

He was asked about the Central Council proposal to limit the MacCarthy Cup to just 10 teams, a reduction of two, and the impact on Offaly – the county would be viewed as ranking 10th for next season and vulnerable to relegation –of being excluded from the elite championship.

“It would be disastrous. Being a bit greedy about it, do we need to change the hurling championship? I personally wouldn’t. The league format is quite good as well at the moment. I know people are cribbing about that as well and I know from an Offaly point of view they won one game and found themselves in a quarter-final. I wouldn’t change the championship anyway, personally.

“I think in terms of hurling at the moment from a Leinster point of view, I thought it was great this year. I know Kilkenny were beaten but it made it interesting.

“Wexford are back. Being an Offaly man you look at what Wexford have done: they’ve invested in under-age, brought a high-profile manager in and got a bit of a buzz back in the county. That’s probably what Offaly need to do. Then obviously the champions of Leinster won the All-Ireland as well so I don’t think anyone could crib about the hurling championship. From an entertainment point of view I thought it was great.”

His own county has plummeted in the game’s standings since he was on the team that contested the 2000 All-Ireland final. This summer there was controversy over the mass resignation of the Offaly hurling review group. According to Murphy the county board may have to consider their positions.

“The Offaly County Board are there to manage the successes of Offaly GAA. At the moment they are a common denominator between different managers coming in and out, between everything that’s happened governing underage. The [review] committee came in, they’ve walked.

“The county board are the common denominator and either they change their approach on things or the same as any company, if things aren’t working you need to get new management on board.

“I think Offaly need the likes of Brian Carroll and Liam Hogan [members of the review committee] and if things need to change at county board level to get more of that calibre of guy involved maybe that needs to happen.”

Meanwhile there was news on the inter-county management front with confirmation that David Fitzgerald will stay in charge of the Wexford hurlers for a further year. In a very successful first season, the Sixmilebridge man led the county to promotion from Division 1B and a first championship victory over Kilkenny in 13 years.

Sligo are looking for a new football manager after it emerged that Niall Carew has stepped down, having been reappointed for a fourth year only recently. Work obligations – he has recently changed jobs – mean it is not possible for the former Kildare selector and Waterford manager to continue in the position.

Finally the Club Players Association is balloting members on a proposal to stage a protest at the GAA special congress at the end of September. The action is proposed as a response to what the CPA believe is the inadequacy of the motions listed to address the crisis in club fixtures.