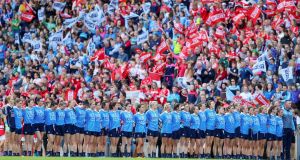 Women’s sport has been on a journey over the last number of years both internationally and domestically. 2018 can be considered Ireland’s most successful year to date across results, general participation and, most notably, attendances at major events.

On an international stage 2018 was momentous for Ireland. The Ireland women’s hockey team were the first Irish team ever to get to a World Cup final, Katie Taylor retained her IBF and WBA world titles, Kellie Harrington secured gold at the AIBA World Championships, Ellen Keane won gold and bronze at the Para-Swimming European Championships, Sanita Puspure returned with gold from the World Rowing Championships and the Ireland women’s 4x100m team won silver at the World U-20 Athletics Championships.

Domestically, the Cork camogie team secured a record 28th All-Ireland title, Wexford Youths women’s team added a second FAI Cup title to their list of honours and, when it comes to attendances, the TG4 Ladies Gaelic Football All-Ireland finals day continued as the jewel in the crown for female sport in Ireland. Once again, this year the LGFA event broke records for the highest attendance at a female sporting event with a crowd of 50,141. When you compare this to a crowd of 27,374 in 2014 it is symbolic of how far female sport has come in Ireland.

However, it is generally accepted that there is still a long way to go for women’s sport and the findings of the Teneo Sports and Sponsorship Index, released this week, firmly back this up.

The Teneo Sports and Sponsorship Index is a comprehensive 1,000 person nationally representative survey carried out by Teneo’s Sports and Sponsorship team and iReach. It examines the Irish general public’s attitudes towards sport and this year part of the research has specifically examined the views of Irish people towards women’s sport.

Over half of those surveyed (58 per cent) believe that women’s sport does not receive sufficient media coverage. This rises to 64 per cent for females only. However, when we delve deeper into the research the findings are interesting and show that, as a nation, we seem to be saying one thing and then acting very differently . . .

It is far too simplistic to blame the media when you consider that only 41 per cent said they have watched a female sports event either on TV or online and this dips to 35 per cent when it comes to females only (males only is at 48 per cent).

When looking at the age breakdown of those who consume female sport in this manner it is interesting to see that it is the 55+ age group that lead the charge here with over half (55 per cent) saying they watch it, on the other end of the scale only 35 per cent of those aged 18-24 have done similar.

The statistics that paint the bleakest picture however is when we examine the more active support and those who have attended a female sports event in the last 12 months.

Although attendance records have been broken in 2018 it seems that the day to day reality is very different.

Only 13 per cent of Irish people say they attended a women’s sports event in 2018. This dips to 12 per cent when it comes to females only, while males are at 14 per cent.

Although 18-24-year olds are the cohort that watch the least women’s sport on TV or online, they are the group leading the way, one in four (25 per cent), when it comes to attending female sports events. Next in line are those aged 45-54 (18 per cent). With this age group it is worth considering the theory that these are parents encouraging their children’s involvement in sport and bringing them to these occasions which, for the most part, are easier to get tickets for and offer greater value for money when compared with the male equivalent.

It is encouraging to see that when social class is examined, 16 per cent of those in the C2DE group confirmed that they have attended a female sports event in 2018 and this is slightly lower at 11 per cent for ABC1. Again, access to tickets and lower ticket prices for great days out in stadiums such as Croke Park or the Aviva Stadium could be a contributing factor here.

An interesting regional variation worth noting here is when it comes to Munster. People in this province seem to be more engaged than any other with 50 per cent stating they have watched a female sports event on TV or online and 17 per cent have attended one. This could be attributed to the All-Ireland finals that both the Cork women’s football and camogie teams competed in, highlighting that success of this nature certainly encourages interest.

However, this theory does not ring true when it comes to the capital. Although Dublin won an All-Ireland women’s football final in Croke Park, the Ireland women’s hockey team that received significant TV coverage during the summer had a strong cohort of Dubs, one of the biggest games in Ireland women’s soccer history was played at Tallaght Stadium with Ireland taking on the Netherlands, those based in Dublin faired lowest on both counts in terms of attendance at a female sports event over the last 12 months (10 per cent) and those who watched either on TV or online (36 per cent).

The journey that women’s sport is on has come a considerable way in this country and there is no doubting that. Major brands such as VHI, Lidl, Bank of Ireland, AIG and Continental Tyres recognise the value of investing in female sports and we now have no end to our instantly recognisable female sports stars in the likes of Sinead Goldrick, Sarah Rowe, Niamh Briggs, Sene Naoupu, Stephanie Roche, Kellie Harrington, etc.

However, the results outlined clearly show that women’s sport still has a way to go in Ireland.

This has been recognised by stakeholders across the board and 2019 promises to be another year that drives women’s sport forward in Ireland. With movements such as 20x20, awards such as The Irish Times Sportswoman of the Year and governing bodies prioritising the growth of female sport, a strong example of this being the IRFU putting the growth of women’s rugby front and centre of their recent strategic plan, all elements point to continued success for female sport in Ireland.

To ensure this continued success there is a shared responsibility across the board to ensure eyeballs are attracted to women’s sports; sports bodies to ensure the events are attractive to attend, athletes to ensure the standards remain as high as possible, the media to ensure strong coverage and, importantly, sports fans to actually attend and tune into these events.

It is very clear that as a nation, we need to stop pointing fingers solely at media for lack of coverage for women’s sport or brands for lack of investment, and get our own bums on seats, into stands and even onto couches to tune into what is some of the most exciting sports action in the world. It is true that if you can’t see it, you can’t be it, however it is equally as true that if you don’t see it you can’t be it.

2 Rugby Stats: Van der Flier’s versatility keeps him out ahead of his rivals

Rugby Stats: Van der Flier’s versatility keeps him out ahead of his rivals 06:00
Double-headers and late evening throw-ins off the cards for this year’s Allianz Leagues 06:00
Fiona Coghlan says quarantine ‘would be incredibly tough’ on Ireland 06:00
Gerry Thornley: Simon Zebo’s return looks like good business all round 06:00
Shiels left to pinch himself as Northern Ireland complete remarkable feat 01:00