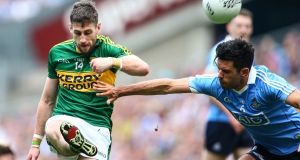 It’s been a tricky week behind the family bar in Dingle for Paul Geaney, particularly when any Dubliners have come through the door.

The Kerry full-forward happily told them all summer long that if the counties met in an All-Ireland semi-final, the Kingdom would win.

“I was convinced that we were going to win,” said Geaney after picking up his GAA/GPA Opel player of the month award for August.

Kerry, of course, didn’t win but Geaney’s own role in Kerry’s two-point defeat to Dublin was a significant one.

A 1-4 haul was enough for him to be a man-of-the-match nominee on The Sunday Game, though manager Éamonn Fitzmaurice still took him off after 67 minutes. Fitzmaurice figured that Marc Ó Sé could influence the game more from defence though later admitted that it “may have been a mistake” to whip off his best forward.

Geaney said he accepted the decision on the basis of it being a tactical switch and praised Fitzmaurice for being man enough to publicly accept that he got it wrong.

“Many’s a game I made mistakes. Sometimes you admit them,” said Geaney. “We all make mistakes. If Éamonn feels that he wants to state that he made a mistake, fair play. It takes a man to admit a mistake. I don’t think he needed to.

“He gave me the explanation that it was a tactical change and that was enough for me. We all row in behind Éamonn. His decisions are his decisions. He’s the manager for a reason.”

Still, it was a frustrating seven minutes or so sitting powerless in the Hogan Stand as an epic encounter reached its climax. The full-forward winced as Peter Crowley, seeking the equalising score, coughed up possession following a thunderous hit from Kevin McManamon, and Diarmuid Connolly scored the insurance point for Dublin shortly after.

“It was extremely hard to watch,” said the 25-year old. “I nearly had a feeling of, ‘I want to jump back in here’. When you’re in the form I was in, and seeing Peter breaking onto it, I’d love to be beside him taking that pass and having a shot.”

Defeat is tough to take. “I was convinced that we were going to win. That’s the toughest part for me. After the final whistle, the year was finished. For me, it felt premature.

“I felt I had more to contribute. I think I said it after the Munster final that I was in the best shape I’d ever been in. I was able for 80 minutes, whatever happened.”

Various commentators attributed Dublin’s fourth consecutive win over Kerry in the championship down to their younger legs and freshness in the crucial closing stages.

Geaney doesn’t agree, despite accepting that a number of veteran performers will probably leave the stage in the coming weeks and months.

“I can’t see how anyone could say Kerry didn’t have the legs because I certainly think we had the legs,” he said. “It was just that Dublin were extremely accurate in front of goal at the very end and they got the chances and we didn’t take make the chances. I think that’s what it came down to.”

Asked if he takes any solace from his own strong form all summer, Geaney nodded.

“A small bit, yeah, but, again, it makes it tougher because before the Dublin game I was saying, ‘If I play extremely well, I can’t see how we’re going to lose’,” he said. “Because we had so many other good forwards on there that if I was doing my bit, then everyone else was going to do enough to get over the line. But that’s not the way sport works I suppose.”