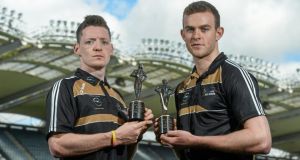 Monaghan captain Conor McManus suggests the GAA bring in a television match official, or allow referees view replays on the big screen in Croke Park, to avoid a recurrence of Tyrone’s Tiernan McCann feigning injury to get Darren Hughes sent off in last Saturday’s All-Ireland quarter-final.

McManus didn’t see the incident, referee Marty Duffy thought he saw it, while the replay showed McCann’s theatrical dive when Hughes touched his hair. Tyrone led by four points with six minutes remaining. They won by the same margin.

“I didn’t see what happened at the time,” said McManus, who returned to Croke Park yesterday to receive the Opel player of the month award for July.

“I suppose the referee, you can’t see what Marty Duffy seen, but again it goes back to helping the officials out. I’m sure when he watches that back himself that he’ll know that Darren didn’t deserve to get a red card so why not have something in place that can tell Marty Duffy at the time.

“Look, there is a screen there – I don’t know if it played it or not – but if it did then 80,000 or whatever was inside Croke Park would have all known it wasn’t . . yet the referee didn’t know?”

“It’s not for me to get involved in that end of things. The GAA have taken it on. The CCCC or whatever it is deals with that. They’re obviously trying to make their mark. Look, at the end of the day, we’re out of the championship and whatever happens from here is irrelevant to us, be it suspensions or anything else.”

Nor does McManus believe diving has become a blight on the game. “I don’t think it has. Obviously when something happens in a game where there are 60-70,000 at it and it’s live on television and a large part of the country watching it then there is going to be a reaction. It goes back to the social media end of things, the fact that everybody has had their say on it. It just escalates from there and it is very hard to control that.

“From Tyrone’s point of view, they are no different to anybody else, they want to get a win and will do anything to get a win. I suppose it’s something that has to be looked at possibly in terms of helping the officials out. The referee is there on his own and possibly needs to get more help from the officials around him to deal with that sort of stuff.”

An understandably sombre McManus laughed, he would be forgiven for crying, when a sense of déjà vu is mentioned.

At this same awards ceremony in 2013 he was asked about Seán Cavanagh’s rugby tackle that denied him a clear sight of goal in the closing stages of that year’s quarter-final.

This high-profile foul, for which Cavanagh got a yellow card, quickened moves towards the black card, two of which were flashed by Duffy last Saturday, along with 13 yellows and three reds.

“That’s the most disappointing thing, we didn’t really give ourselves a chance to win the game.

“Tyrone didn’t bring much different to a lot of the games we would have played this year, defensively-wise. Even in our first game against Cavan they were fairly defensive, Fermanagh and Donegal the same, so Tyrone didn’t really do much different from what Donegal did say, so we knew what we were coming up against.

“We were slow and we were laboured in our build-up and we didn’t inject much pace into it. So we have to shoulder the blame.”

And what of Tyrone’s chances against Kerry?

“They have a chance, no doubt about that, they’re hard to beat with the way they’re set up. There will be no seven goals for Kerry this time, I can assure you that. I probably would still tip Kerry to come through it.”