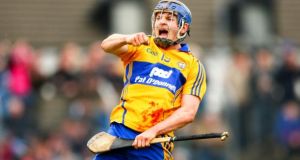 All-Ireland champions Clare moved to the top of Division 1A of the Allianz Hurling League with Shane O’Donnell proving provider and goal-scorer in a 5-18 to 0-20 destruction of Waterford at Cusack Park in Ennis.

The league points were effectively wrapped up at half-time, at which stage Clare led by an astonishing 4-15 to 0-4 with the goals coming from captain Pat Donnellan, Podge Collins (after he was set up by O’Donnell), O’Donnell himself and Peter Duggan.

Although Waterford, with the wind, put up a better performance in the second-half, they were left chasing too much and O’Donnell’s second goal – and Clare’s fifth – really put the icing on the cake for Davy Fitzgerald’s men.

Galway’s hot and cold league campaign continued when they bounced back from a defeat to Kilkenny a week ago by outplaying Tipperary at Pearse Stadium, emerging winners by a three points margin: 3-16 to 1-19.

Galway led 1-8 to 0-6 at the break having played into a stiff wind. Niall Healy had been impressive with point scoring early in the game and added a goal to his collection when he finished a fine move to the back of the net.

The Tribesmen, however, held on to claim the points and put Tipperary in danger of relegation.

In Divison 1B, Cork trailed Antrim by six points at the break but turned matters around in the second-half to run out 0-18 to 1-12 winners.