Ciarán Murphy: Mayo can conjure up that bit of magic to beat the Dubs

Mayo winning the All-Ireland would not be a miracle. They are the second best team 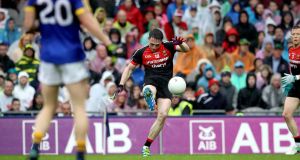 So, what do we mean when we say we think Mayo will win on Sunday? Is it an informed, dispassionate decision having pored over the relevant data, looked at the respective teams, and input all that into your GAA game-prediction algorithm? Or is it something a little more…instinctive?

I said in May in these pages that they would win the All-Ireland, and my rationale was suitably unscientific – “because, goddamnit, the world has taken enough beatings over the last 12 months”.

We should also realise that life isn’t fair, and sport doesn’t operate by the rules of sentiment. But we never stop asking sport to be a little fairer than life, even if it’s just a little. And it’s in that tiny space between the world as it really is, and the world as we’d like to see it, that we allow ourselves the chance to dream of a Mayo victory.

We need to put on the record, of course, the fact that Mayo winning this All-Ireland would not be a miracle or anything close to it. They are the second best team in the country, and through the summer, through the defeat in Salthill, the near-miss against Derry in Castlebar, and Cork in Limerick, we lost sight of that.

They ran Dublin to a replay last year, and they hammered Kerry when it mattered in this year’s semi-final – nearly blew it the first day, and then blew them away in the replay. So that display brooks no argument. They deserve to be where they are.

But Dublin are Dublin – only more so. I was talking to Westmeath footballer Kieran Martin last weekend, and he reckons Dublin are five or six points better this year than they were last year.

They have been imperious all season, and going on what we have seen so far Dublin should win this game with a little to spare.

Any argument that you make for Mayo comes with a number of caveats, and each one not beyond the bounds of possibility when taken in isolation. Yet when taken together they add up to an intimidating list of “things that need to happen”.

We readily sign up to the idea that Conor Loftus, with a grand total of one championship start, can have as great an impact, or greater, than the combined forward abilities of Bernard Brogan, Paul Flynn, Eoghan O’Gara, Kevin McManamon and Cormac Costello in the last 15 minutes.

Or that Stephen Coen, an under-21 last year, can match former Footballer of the Year Michael Dara McAuley stride for stride off the bench.

Or that Paddy Durcan can spin that roulette wheel of a right boot of his and hit the jackpot in front of goal.

And yet…and yet. We must pay attention to the straws in the wind.

Jim Gavin said he felt Dublin did not really perform in either All-Ireland final last year, a remark which was seen by some in Mayo as disrespectful. Over the course of two games they scored just 1-14 from play, discounting Dean Rock’s 10 frees, and the two own-goals the first day.

After the drawn game we said that the Dublin forwards would never be held like that again – but their entire team still only managed 1-8 from play in the replay.

Dublin have freshened up their forward line, but are we sure they can cut loose against this magnificent Mayo defence?

Con O’Callaghan has been exceptional all summer, but he has not met anyone like Brendan Harrison or Chris Barrett. Well, actually, he has, and that man’s name was Sean Andy Ó Ceallaigh.

He was the Galway under-21 full-back who – on a losing team, marking O’Callaghan in a line-up based around his extravagant talents – cleaned him out in the last ever All-Ireland final at that grade in Tullamore in April.

Ó Ceallaigh’s approach was to play him from the front, rough him up, and be absolutely fearless on the ball. Sounds familiar, right? Mayo will need to defend as heroically as they did last year, but it’s not beyond them.

A prediction for Mayo, then, is based on a couple of things – out-and-out romance being just one of them. It is a recognition of their enduring excellence.

It’s also a hope for the sport generally that for all the talk of Dublin’s domination, they would have been beaten by two separate teams in the national finals of 2017, which would put the lie to all the doomsday scenarios being put out there.

Mayo are good enough to be in with a shout with 10 minutes to go. Leave some room in your deliberations for a bit of magic, and you can see them closing it out.