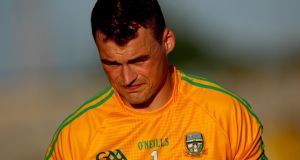 Meath’s goalkeeper Paddy O’Rourke dejected after defeat to Offaly in the All-Ireland series in 2017. He has opted out of this season’s panel. Photograph: James Crombie/Inpho

If it’s January, it must be time for a team meeting. And so it was last month that we gathered, my junior A team-mates and I, for a pre-season pow-wow. At my advanced age, it’s safe to say I’ve sat through a fair few of these, but something happened this year that I’d never heard before.

A man stood up. A man stood up and said – “well to be honest lads, we’re a junior team, so this idea that we should be doing more and more training just doesn’t sit. There’s some of us here who’d be playing senior if we wanted to put that much effort in, so let’s get down to training twice a week, put the effort in while we’re there, and let’s enjoy the year.”

The man’s credentials were impeccable. He’s one of our most experienced players, he keeps himself in brilliant physical condition, he’s a leader. And he just asked us all to commit . . . less? In that moment, this lazy old man could have kissed him.

Even given his unimpeachable position in the team, and even given his years of service – it still took some stones. I’d never heard it before. And of course, it made perfect sense. We were all thinking it – even the lads who were saying differently in the group were in a kind of “team-meeting flow state”, a mode of cognitive dissonance familiar to any GAA player, where one can convincingly lie to oneself and your team-mates, know you’re doing it, and believe it anyway.

The reaction was one of almost imperceptible relief. If we trained twice a week with the ferocity of our resident Spartacus, then we’d be fine. But that’s the exception which proves the rule, even at our lowly status.

There are not many panels now telling each other to train less and enjoy yourself. It is, in fact, almost antithetical. Kieran Bergin of Tipperary, Clare’s Brendan Bugler, and most recently Paddy O’Rourke from Meath have made some comments as they walked out the intercounty door for good in the last few months that have raised eyebrows.

Last week, speaking to a bank’s GAA blog, O’Rourke said: “How can you justify training five or six nights per week for eight or nine months of the year, without a realistic chance of winning anything? All that training and commitment for one or two big championship games, so many other players must also be hating it. I honestly couldn’t tell you what motivates the rest of them.”

The piece is no longer online, which might be an indication that someone somewhere was a little burned by the reaction, but, along with the earlier comments from Bergin and Bugler, the reverberations are still being felt.

Some uncharitable souls have suggested there’s no one forcing them to play intercounty football, and that if they had something to say then maybe they should have said it while they were still playing.

Players would have had ample opportunity to stand up and say it’s intolerable if they felt it was intolerable, but managers would see it as a direct challenge to their authority. And it’s not just in the GAA – look at Joe Schmidt, or Pep Guardiola in football. Managers are not generally people to whom the idea of “less is more” appeals too much.

The fact of the matter is that the bar is often set by the most fanatical person in the group; not by the median, and certainly not by the least fanatical. There is a dynamic at play here which is impossible to square. The discipline required to compete at this level is intrinsic in many players, and for all that O’Rourke et al rail against it, those players who enjoy it and derive satisfaction from all that commitment are still very much in the majority. They would have to be.

But for those players who don’t have that intrinsic desire in themselves for relentless self-improvement, the sacrifice is effectively enforced by group loyalty and, for want of a better word, shaming – “your county needs you”. If that’s what you need for motivation, it’s not going to last forever.

A friend of mine once described the GAA at intercounty level as “an extreme warrior-sporting culture powered entirely by emotional blackmail”, which might be overstating it somewhat, but there’s a grain of truth in there.

We would all love to see the best players, the mavericks, the Matt Le Tissier types, accommodated at intercounty level. But extreme physical fitness is no longer an edge you have on your opponents, it’s the entry-level requirement. It’s to their credit that they have spoken out on something they feel strongly about, but the players themselves know it’s much easier to find a receptive audience for what they’ve said outside an intercounty dressingroom, rather than inside.