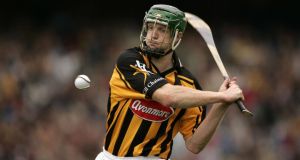 Henry Shefflin will be starting out on his 15th season with the Kilkenny senior hurlers when he lines out against Clare in the counties’ opening National Hurling League game tomorrow. Photographer: Dara Mac Dónaill

Kilkenny manager Brian Cody has followed through on his undertaking to try out new faces in this season’s league. For Sunday’s match against All-Ireland champions Clare, Kilkenny name a new-look team with just six of the starters from the county’s final championship match last summer.

Former All-Ireland winner David Herity continues in goal instead of Eoin Murphy, who replaced him for last year’s championship.

Michael Walsh and Brian Kennedy are named in the full- back line and Joey Holden at wing back. Tommy Walsh is on the bench and his place at centre back goes to Lester Ryan, normally a centrefielder.

There have been no moves yet to re-schedule matches on a busy weekend for Gaelic games despite the terrible weather yesterday. GAA spokesperson Alan Milton said no decisions would be taken on the playability of pitches until closer to the throw-in times.

This afternoon there are two All-Ireland club football semi-finals for decision and this evening two matches to open the Allianz National Hurling League: Tipperary v Waterford in Thurles and Cork v Limerick in Páirc Uí­ Rinn.

Meanwhile there was confirmation Dublin football defender Kevin O’Brien will miss the rest of the season after rupturing his anterior cruciate ligament in DIT’s Sigerson Cup defeat by UUJ on Thursday.

Dublin manager Jim Gavin said: “On a personal level this is extremely disappointing for Kevin who played a significant role during the 2013 National Football League, Leinster and All-Ireland campaigns.

“Our team medical protocols have been activated to ensure he will receive the best of medical care and the Dublin football coaching staff will assist Kevin in his recovery over the weeks and month ahead.”