'Belief' the key to Dublin’s success 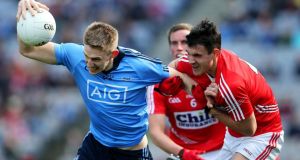 Such is Dublin’s strength in depth, they were able to spring Eoghan O’Gara (left) from the bench against Cork in Sunday’s Division One semi-final at Croke Park, and he made a big impact. Photograph: Cathal Noonan/Inpho

Dublin in rare times. Belief is what drives champions ever onwards.

“Look, belief is the only thing that really stopped them when they were winning five Leinster championships,” Mickey Whelan told us yesterday.

“It was in the mind, really. When they got out of Leinster, there was no safety net. So they had to learn how to win without that.

“And the year (2010) that we came through the backdoor and were beaten by Cork in semi-final, that year, they won five games that if they lost, they were out. So that was a great experience for them. They learned how to win under pressure.”

Dublin, as holders of both League and All-Ireland crowns, are obviously in high demand. Especially after their latest feat.

Diarmuid Connolly, fresh from his epic 2-5 for St Vincent’s in the All-Ireland club final, was a central figure in the revival. The same must be said of Bernard Brogan, Eoghan O’Gara, Michael Dara Macauley and Paul Flynn, but in Connolly they have an outfield leader of a group on the brink of, well, complete domination.

Connolly doesn’t do public relations. Whelan, his former coach and mentor at both St Vincent’s and Dublin, gave his take on the continual rise of Dublin’s number 12.

Maturing
Interest always peaks when such a naturally gifted sports man enters his prime. “He’s just getting to grips with what’s required,” Whelan continued. “It’s just maturing. They’re giving him more and more responsibility. And they’re good shoulders to be placing responsibility on. He’s a good guy to think through things.”

There have been acts of ill-discipline but the story has increasingly been about his football rather than a hair-trigger temper.

“Nothing has improved in his game technically,” Whelan explained. “He was always very technically gifted. And tactically. He’s a smart footballer. But he’s just matured and developed and grown into the game more and more. The more responsibility he gets, the more he’s able to handle.”

Ever a concern up Marino way that this wouldn’t be the case? “No,” Whelan replied. “He was always going to make it, regardless. But it was a good environment for him. He was at school with a lot of the guys so there was always that sort of camaraderie.”

Another worth asking Whelan about is Macauley. Footballer of the year, unorthodox yet so effective when Dublin need him most, it was Pat Gilroy’s management, with Whelan as coach, that first put a Dublin jersey on the Ballyboden midfielder.

What makes him so effective? “Belief in himself. When you’re getting knocked, it’s very difficult to grow into it. But I mean, he’s a phenomenal athlete. He works really hard. He has a great work ethic. He has fabulous hands.

“So they’re very good prerequisites to have for any position in Gaelic football.”

Of the glue that binds Dublin’s attack together, Whelan simply called Alan Brogan the “most natural centre forward” and dismissed any concern that time had caught up on him.

“No. Would you be worried about the Gooch if he gets back? Very good players, sometimes a break is actually beneficial for them.

Pluses
“He’s probably won eight Leinster championships so there was no real break for him until he got injured. The injury was unfortunate but there could be pluses out of it. He should get another couple of years.”

After a lifetime watching and being part of Dublin peaks and troughs, it’s put to Whelan this could be the finest group ever assembled.

“Well, you asked me that. I’ll ask you. I’m too close to the scene there. As a neutral now, do you think it is? I think most of you would.

“I think it’s probably the strongest in depth. And I think that, there are a lot of the team still there that won and broke through in 2011. They’re there in one form or another. They’re either starters of they’re there in the training games.”

Considering the elusive goal of modern times is to retain the All-Ireland, the wonder is whether it’s down to amateurism or hunger or something unknown.

“So if you get that side of it right, and I think Dublin have it right at the minute.”

Are they out on their own, Mickey?

Danger
“Listen, this is the danger, fellas. They won two All-Ireland’s by a point (sic). Don’t get carried away. They’ll be talking about breaking up Dublin.

“Did they say anything about Kilkenny when they won eight titles? Do you know what I mean?

“You just have to take it as it goes. Nobody is getting carried away in Dublin who are associated with the team. This team believes they can beat anybody.”

And consider the under-21s are still to be added (they face Cavan in Saturday’s All-Ireland semi-final).