Duffy and Gillick attempt to wind back the clock 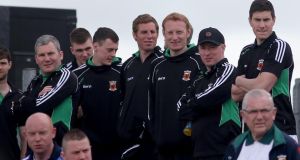 We were delighted to welcome David Gillick in to us on the Irish Times Second Captains Podcast on Monday, to talk about his decision to retire from international athletics.

It’s only when you look back that you realise here is a man who re-defined (along with Derval O’Rourke and Paul Hession) what it was to be an Irish athlete.

Irish sprinting effectively didn’t exist before those three came along in the middle of the last decade. In one hour in Berlin at the World Championships in 2009, O’Rourke finished fourth in the 100m hurdles, Gillick qualified for the final of the 400m, and Hession narrowly missed out on the 200m final.

That is an extraordinary level of performance – to be in the top eight in the world at your chosen event. Having competed at that level, transition into retirement is always going to be a challenge. And for him, one of the things helping him handle that at the moment is... his local GAA club.

It shouldn’t be that much of a surprise – he grew up in a GAA household, his brother John is playing on the team, and he’s obviously in tremendous physical condition.

Nor should it be a surprise to hear of Gavin Duffy’s return for Mayo. But for many people it’s more than just a sign they want to stave off the middle age spread – whether it’s true or not, many people would see it as a return to their roots, an acknowledgement of where they came from, a sure-fire sign that he’s ‘one of us’.

I’m sure this is what infuriates rugby and soccer fans about the GAA – of course GAA people don’t have an exclusive hold on what it means to be Irish.

But when Muhammad Ali comes to Ireland, or the All Blacks, or even Canadian astronaut Commander Chris Hadfield, the oldest photographer cliché in the book is to pass them a hurley and let them have a swing at it.

Duffy’s return is an interesting, and even more high-profile one because we still don’t know what impact he is going to have on this summer yet.

His initial return was greeted with huge surprise and attention – and then when it came time for Mayo to play Roscommon in the Connacht semi-final, he wasn’t even listed on the substitutes.

He ended up not playing a minute of football, and we’re left waiting to see where he might line out, and what skill set he has transferred from a lengthy and hugely fulfilling rugby career with Harlequins, Connacht and Ireland.

There was an interesting comment from James Horan a few weeks after Duffy’s return to the Mayo panel, which suggested that one of the main issues he was having with his return to Gaelic Football was the hand-pass.

A seemingly simple part of the game, Duffy’s body was just so used to passing the ball one way, that it will take him time to retrain his reflexes.

It’s an insight into just how a professional sportsman’s body works – things are done until it’s a robotic, automatic reaction, and trying to change a seemingly miniscule action actually takes time.

David Gillick told us something similar off-air – he had never torn a hamstring in twelve years of an athletics career, but the constant movement of Gaelic Football, left and right, as well as backwards and forwards, and the leg extension required to solo the ball while running at full tilt, meant that put major strain on a muscle that had been trained to run in straight lines.

And for Gillick too there is the simple question of getting hit again... although in fairness, indoor 400m is the closest thing track and field offers to a good old-fashioned schemozzle (in fact the recent Cavan/Armagh pre-match parade bore many of the hall-marks of an EXTREMELY slowly-run indoor 400m).

As for the athlete themselves, it’s worth asking why they’d want to do it. Duffy and Gillick grew up playing it, they knew they’d have something to offer, and so the thought that they might embarrass themselves I’m sure never came into it.

But they are setting themselves up for a fall to some extent – a world class performer at one sport must have an ego, and joining a team where you will be the least experienced member means you’ll have to swallow your pride a bit.

But if they can get past that, at a deeper level, it appeals to them because it matters – and it matters not just to themselves and their team-mates but to a whole constituency of people outside the white lines.

And the roar of the crowd is an addictive thing, whether that’s in Twickenham, the Olympic Stadium in Berlin, McHale Park or Parnell Park on a summer’s evening.