Donegal connection dupes Vinny and the Dubs once again 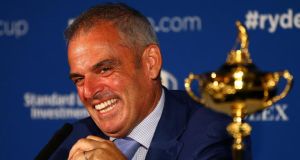 Paul McGinley: “The Donegal link reminded the lads of their darkest hour on Sunday, and there was no joy either as McGinley flourished his wild card trio.” Photograph: Richard Heathcote/Getty Images.

That a fourball of middle-aged men could tee off for a pint a little after noon on a Tuesday seemed slightly incongruous, but Foley’s pub on the Clontarf Road was long full of non-conforming characters. Charlie St John Vernon was available at the drop of a beer mat as he had more rent flowing in than NAMA; Fran’s launderette firm was buzzing since the schools went back; Macker worked his own taxi hours, and Vinny Fitzpatrick had just finished a dawn shift on the buses.

For the lads, a pint or two as the sun crept past the yard-arm was therapy for the events of Sunday in Croke Park which left them as stunned as their beloved boys in blue. Such had been their mental fragility and bewilderment in the aftermath of the All-Ireland semi-final loss that they hadn’t had the heart to face the froth of Foley’s.

Instead, they shook hands and split for home at the bottom of Vernon Avenue, vaguely aware of Vinny’s invitation to reconvene for the European Ryder Cup wild card announcement on Tuesday, ‘if anyone was up for it.’

Time, in life and in sport, was a fair healer and when Vinny ducked his fat head into the cool, dark recesses of Foley’s two days later, his three pals were in position, pints to hand. Briefly, they paused for reflections on Sunday’s events which had left their diaries free on the third Sunday of September.

Macker felt too many Dublin players under-performed, particularly across the half-back line and in midfield where ‘we needed MDM to roar like the lion from MGM; instead, he purred.’

Charlie Vernon observed how difficult it was for any team to retain the Sam Maguire. “Only Kerry have done it since 1990. Let’s be honest chaps, history was against us.”

For Vinny, the pasting was a little easier to talk about now that the wounds weren’t so open. Hard though it was to admit, Dublin just weren’t as good a team as everyone built them up to be. Their chin had been exposed in Croker before, only this time Donegal landed the haymaker.

“Lads, we were jammy winners against Kerry in 2011; and Mayo could have been out of sight by half-time against us in the final last year,” he observed. “You know, this might not be the end of the world. We’ll regroup, and come back, just as Donegal and Kerry have done. Sport is cyclical and every top team has their ups and downs.”

As always, the distraction of a bet worked a treat. Vinny peeled back the top of a few beer mats and passed around the pens and pencils he always carried in his jacket. Looking up at the Sky Sports pictures on the telly, he said: ‘We’ve got five minutes before McGinley shows his hand.’

A silence fell over the corner of the Clontarf hostelry; only this was unlike the silence on Hill 16 of two days earlier. There was a chance to win €30, which was almost a gallon of the finest porter in Foley’s – it was not to be sniffed at. Vinny wrinkled his brow and engaged his little grey cells.

He reckoned there were six runners in the field, Luke Donald, Ian Poulter and Lee Westwood, all English; Stephen Gallacher of Scotland, Spanish veteran Miguel Angel Jimenez and Italy’s Francesco Molinari, who reminded Vinny of the squat detective in the Pink Panther cartoons.

Thinking to himself, he narrowed the list down: “Jimenez hasn’t done enough this summer. He’ll be the captain in America in 2016 so McGinley will probably name him as one of his two remaining vice-captains.”

That left three from five. “Donald’s form has dipped. He was a lock for the team three months ago but has gone awry after a swing change and hasn’t figured in any of the major events since.”

And then there were four. “Gallacher has to be in,” Vinny reckoned. “He would have made the team automatically but for David Howell’s final round 63 in Italy; he’s scored low in Gleneagles before and he’ll have the Scots clans revved up like William Wallace.

“Poulter isn’t my favourite cup of Barry’s but he ignited the miracle at Medinah and seems to come alive in the Ryder Cup. They’re both in.”

After much furrowing, Vinny scribbled down his final call, folded the beer mat in two and handed it over to Charlie Vernon, the judge.

As McGinley appeared on the screen, complete with Colgate smile, Fran remarked at the honour of having a Dub leading Europe into battle against the Yanks.

At that, Macker coughed and pointed out that McGinley was of deep-rooted Donegal stock. The Donegal link reminded the lads of their darkest hour on Sunday, and there was no joy either as McGinley flourished his wild card trio: Gallacher, Poulter and Westwood.

As McGinley explained why he had picked Gallacher, Poulter and Westwood, it struck Vinny the Donegal connection had duped the Dubs once again.

BBC to draw from well of nostalgia during barren months 20:50
Health official says decision to hold Liverpool-Atlético game was wrong 19:12
‘There may be no more tennis this year’, says Wimbledon chief Lewis 18:54
Only a matter of time before British Open bites the dust 18:24
Even 60 years on, French rugby tome still holds water 18:00