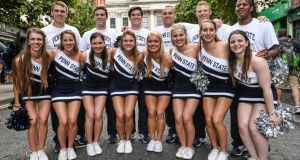 A fly-by by the US airforce ahead of the Croke Park Classic American football game between the University of Central Florida Knights and Penn State Nittany Lions drew criticism on Twitter this afternoon with some people believing the end had come.

One woman tweeted: Next time time you wanna fly two F-16s from the US Air Force over the house, give us a f****** warning. Everyone here thought, this is it now.

Another man said the noise had set off every car alarm in north Dublin while Alan Costelloe tweeted: I think most of central Dublin just had a heart attack at a low fly-by of a jet.

Donald Clarke of this parish wondered what on earth the noise was in slightly more colourful terms before realising it came from the F-16s to ‘buzz our city’ before the game.

The capital was awash with the blue, white and gold regalia of transatlantic visitors before the game.

It mightn’t be the shape of ball some were looking for, but the multitudes of visiting fans from Florida and Pennsylvania were wholly unperturbed by events in Limerick as they basked in the revelry and hospitality of their Irish hosts ahead of a less traditional season-opener college football game.

2 jets just flew over Drumcondra in low flying formation - unreal! Not a car alarm silent in the area...

WHAT THE FUCK WAS THAT? (In the air over Dublin 8)

Apparently that noise was an American warplane that has been invited to buzz our city before undergraduate "football" game in Croke Pk. Hmm?

From early today, an estimated 20,000 visitors from the US thronged Temple Bar and clogged the arteries to Jones’ Road and Ballybough following two days of festivities involving open-air traditional music sessions, pep rallies and copious amounts of the obligatory black stuff.

The event is estimated to be worth € 30 million to the Irish economy, and though the figure pales in comparison to the € 100 million thought to have been splashed out by the supporters of Notre Dame and Navy following their Aviva tie two years ago, the occasion lived up to the frenzied precedent set in 2012 as fans were treated to a pre-game colour ceremony by US Marines, the airforce flyby and a parachute drop.

However one of the parachutists missed his target and instead of landing in Croke Park found himself on the railway line behind Hill 16.

An expectant crowd of around 60,000 filed into GAA headquarters as the multitudes of University of Central Florida Knights and Penn State Nittany Lions players cascaded onto the expertly-altered pitch amid decidedly unfamiliar surrounds.

Although the much-anticipated halftime show didn’t quite replicate the wardrobe-malfunctioning, offensive-gesturing events of controversial Superbowls past, the crowd were nonetheless left transfixed by a small-sided, goals-only hurling match featuring top intercounty stars from Munster and Leinster.

Having indulged in the questionable authenticity of Temple Bar’s pre-match stadium tailgate party, Lions supporter Lisa Corradle found safety in numbers among a sizeable contingent of her Penn State compatriots.

“We just travel really well, we’ll go anywhere there’s a ball game. This is exciting because it’s the first time we’ve been outside the United States to play a game, so we all make a vacation out of it,” said Ms Corradle, who is rounding up an all-Ireland odyssey following trips to Cork and Galway.

That’s not to say the Florida fans have any particular aversion to the Emerald Isle. The dominance of blue-clad Lions followers can probably be attributed to the estimated half a million alumni the college boasts, who regularly fill Penn’s gargantuan 106,000-seater Beaver Stadium.

Resplendent in the golden livery of their beloved Knights, Florida natives Jim and June Rieb are hoping that the locals will lend their vocal support to their team, whose kicker Sean Galvin hails from Bandon, Co Cork.

“We’re hoping the Irish are going to be rooting for our team, because our coach is called George O’Leary. We’ve got seven people on our team with Irish influence between coaches and players,” said Mr Rieb, currently in the midst of his fourth visit to these shores.

Things were looking good for the Riebs when the University of Central Florida Knights managed to claw their way back from 10-3 down to take the lead in the final two minutes. But a thrilling finish saw the Penn State Nittany Lions seal the victory with a field goal from the last kick of the game.

1 Real Madrid crash out to relentless Manchester City performance
2 Lyon make Juventus wait another year despite Ronaldo double
3 Andy Farrell admits Ireland net may need to be spread wide in the autumn
4 Radically shortened intercounty season to be discussed
5 The game they loved so well: How cricket united Hume, McGuinness and McCann
Real news has value SUBSCRIBE
Here is your handy guide to sport on television this week