Crisis at OCI intensifies as Rio ticket scandal expected to cost over €750,000 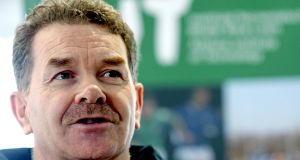 Spiralling legal and expenditure costs related to the Rio ticketing scandal – now expected to exceed €750,000 – have caused further rifts within the Olympic Council of Ireland (OCI), a letter seen by The Irish Times last night clearly attributing the brunt of that responsibility to the three-person crisis management committee.

These claims have been strongly contested by the crisis management committee.

The letter singles out the crisis management committee “under the direction” of which “expenditure is likely to exceed €750k directly on the review” of the Rio ticketing scandal.

The crisis management committee was set up on August 21st in the immediate aftermath of OCI president Pat Hickey’s arrest in Rio.

Sarah Keane and Robert Norwood, the two remaining members of the crisis committee following the resignation of Ciarán Ó Catháin on Wednesday, responded to the contents of the letter last night, stressing that agreement to employ such agencies was made by the entire executive committee of the OCI.

In a communication to Henihan, they state that his letter could be “perceived as an attempt by you to distance yourself from executive committee unanimous decisions leading again to a question around the governance of the organisation.”

It continues: “Two of the bodies whose appointment you published as attributable to CMC were appointed prior to CMC creation, the rest were appointed with the clear and minuted authority of the unanimous executive committee.”

Hickey stepped aside from his role as OCI president pending the outcome of that criminal investigation, although he is still described by Henihan as “our president” in the letter dated November 3rd and circulated to all of the 36 Irish sports federations affiliated with the OCI, updating them on a meeting of the OCI executive committee on Wednesday evening.

This is not mentioned in the OCI letter, and Ó Catháin, when contacted by The Irish Times last night, declined to comment on either the motivation or timing of his resignation: however it is understood not to be directly related to charges of spiralling legal and expenditure costs but rather a more general frustration at the apparent reluctance for reform.

For now both Keane and Norwood will continue to lead the crisis management committee, although this development comes against an already fractured OCI executive: second vice president John Delaney and honorary treasurer Kevin Kilty both resigned last month, days before the remaining executive committee members (now numbering nine from the original 13) met at their offices in Howth to discuss the findings of a Deloitte report, which identified several failings in the organisation’s governance and management.

The OCI letter makes no reference to the equally spiralling legal and expenditure costs related to Hickey’s criminal case in Rio: according to the OCI’s own constitution, they are responsible for the liabilities of any executive committee member, unless they are found guilty of that offence.

Henihan’s letter also confirms the OCI report into the handling of the ticketing arrangements in Rio, which was being carried out independently by Grant Thornton, was postponed on Wednesday following the intervention of Hickey’s legal team.

In a separate development, Hickey’s family strongly defended that legal action taken against the OCI to prevent them from proceeding with the report - claiming the report would be “inappropriate” and “worthless”.

That report was also commissioned by the entire OCI executive committee back on August 26th, a week after Hickey was arrested in Rio: according to a statement issued by the Hickey family, this legal action was necessary to protect his “constitutional rights, fair procedures and an entitlement to a fair trial”.

The statement is also critical of the intentions of the Grant Thornton report, claiming it “could not be deemed conclusive” and is “inappropriate under all the circumstances until the Brazilian issues are resolved by the appropriate Brazilian court”.

Full letter from Dermot Henihan to the National Federations

To All National Federations,

Please find below an update from last night’s Meeting of the Olympic Council of Ireland Executive Committee (2nd November 2016).

The Grant Thornton review will be postponed until further notice due to the current proceedings in Brazil against our President- Pat Hickey, and this decision was taken in order not to prejudice the case in any way.

Furthermore, we received correspondence from Pat Hickey’s Legal Team to advise that should the report proceed they would have no other option than to take out an injunction.

There are at least eight other persons who through separate legal representation cannot take part in the Grant Thornton inquiry until such time as all the outstanding issues in Brazil have been dealt with by the Brazilian Judicial Authorisation.

Under the direction of the Crisis Management Committee the Olympic Council expenditure is likely to exceed €750K directly on the review with Grant Thornton, Deloitte, Espion, Blacknight, Communication Clinic, Wilson Hartnell, and Arthur Cox legal fees.

We will continue to cooperate fully with the Judge Moran non statutory inquiry, and will keep you up to date on same.

Response to Dermot Henihan from Sarah Keane and Robert Norwood

We refer to your recent communication to National Federations dated 3 November 2016 which contained a number of key errors which must be corrected without delay.

Your letter specifically sets the responsibility for considerable OCI expenditure at the door of the Crisis Management Committee (CMC) and may be interpreted by many as a public criticism of your fellow directors. It may also be perceived as an attempt by you to distance yourself from Executive Committee unanimous decisions leading again to a question around the governance of the organisation.

As you should be aware your comments are incorrect and the expenditure facts are as follows:

1. The Communications Clinic was hired by OCI, the initial contact coming from a representative of Mr Hickey in Brazil, and the agreement was made with the Acting President. Both events pre-dated the creation of the CMC.

2. Arthur Cox was appointed on 19 August by the Acting President (after considerable communications via board members and copied to the entire Board) and that appointment was ratified by the Executive Committee on 21 August as was the appointment of the Communications Clinic.

In summary, two of the bodies whose appointment you published as attributable to CMC were appointed prior to CMC creation, the rest were appointed with the clear and minuted authority of the unanimous Executive Committee. Due to the lack of engagement with the Federations which the CMC were concerned about we temporarily engaged the services of WHPR to circulate update emails to the Federations. The engagement of WHPR lasted 3 weeks.

Also, as you are aware Mr Hickey has stood aside as President of the OCI and from all other Olympic functions until such time as judicial proceedings in Brazil involving him are completed.

Mr Willie O’Brien is the OCI Acting President and due regard for this should be had in all correspondence.

The CMC has at all times sought to act responsibly during this very difficult time for us all and in the very best interests of the Olympic Council of Ireland to whom we owe our duty as directors of the company.

1 ‘A radical departure’: Who are CVC and what are their plans for rugby?
2 Ken Early: Why international football is fading into obscurity
3 Connell losing touch with club championship is real tragedy of Normal People
4 Colin Kaepernick’s exile is too fresh for NFL to speak out on US protests
5 All in the Game: Nigeria bite back in war of words with Redknapp
Real news has value SUBSCRIBE