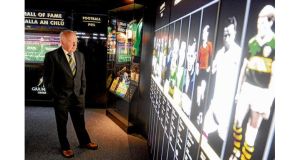 The GAA yesterday formally opened the Hall of Fame section in their Croke Park museum. The foundation of the award scheme is the Teams of the Millennium, announced in 1999 and 2000 and all 30 were inducted along with Limerick hurler Eamonn Cregan and Offaly footballer Tony McTague.

The Hall of Fame features personal memorabilia of the players involved and a screen facility for watching them in action. This year’s inductees were chosen by a GAA sub-committee from the years 1970-74.

On an annual basis additional players will be inducted from the succeeding five-year intervals as well as from years preceding 1970, the year benchmarked as the start of the modern era in Gaelic games.

Cregan and McTague were presented with commemorative sculptures in the museum as part of the ceremonial launch.

Cregan played for Limerick for 19 years and was on the only side from the county in over 70 years to win an All-Ireland, in 1973. For most of his career he was a forward but famously, for that ’73 All-Ireland final he was selected at centre back to curb Kilkenny’s Pat Delaney and played a major role in his county’s victory.

A dual player, he featured on the Limerick football team that made a then rare appearance in the Munster final of 1965 having beaten Cork. He also went on to enjoy success as a manager, leading Offaly to All-Ireland success in 1994, ironically against Limerick.

Cregan currently coaches Mary Immaculate College of Education in Limerick, who have made a creditable debut in the Fitzgibbon Cup this year.

McTague was one of the great free-takers in Gaelic football and played for the Offaly team that won the county’s first senior All-Ireland, having also lined out in their first elite All-Ireland title of any sort, the 1964 minor victory.

The senior win of 1971 was followed a year later by the achievement of back-to-back titles.

McTague captained Offaly in 1972 and scored 16 points between the draw and replayed final against Kerry. Speaking about the modern game, he expressed the opinion that small counties like Offaly should consider amalgamating.

“The idea of weak counties ever appearing again is over. I think – and it may sound ridiculous – weaker counties with a small population should be given an option, even though some mightn’t take it up, of amalgamating with a county that borders them to have a realistic chance of taking on the big guys.

“All counties have their pride and all the rest of it but the option should be there if they want because it’s unequal now and it doesn’t make sense.

“I know this sounds like heresy but Laois and Offaly are politically the one constituency. I’m sure a lot of people in the counties might be thinking, ‘What’s that fella talking about? Is he drunk?’ because we’ve been successful to some extent but I don’t see anything wrong with it myself.

Players from both Teams of the Millennium were in attendance, including Tony Reddin (Tipperary), Jimmy Doyle (Tipperary), Ray Cummins (Cork), Eddie Keher (Kilkenny) from the hurling team and Martin O’Connell (Meath), Mikey Sheehy (Kerry), Seán Murphy (Kerry) and Seán O’Neill (Down) from the football team.