Conor McGregor says he has retired from MMA 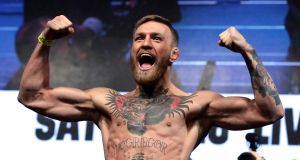 Former UFC featherweight and lightweight champion Conor McGregor has announced his retirement from the sport.

The Irishman, who finishes with 21-4 record, said on his Twitter account on Tuesday morning that he had decided to call it a day and wished his former colleagues well.

The 30-year-old returned to the octagon last October after a hiatus of nearly two years where he fought Khabib Nurmagomedov for the lightweight strap.

The Russian retained his UFC lightweight title when he beat McGregor with a fourth-round submission but the event was marred by a post-fight brawl which led to both fighters being fined and suspended.

“I wish all my old colleagues well going forward in competition.

“I now join my former partners on this venture, already in retirement.

“Proper Pina Coladas on me fellas!”

Hey guys quick announcement, I’ve decided to retire from the sport formally known as “Mixed Martial Art” today.
I wish all my old colleagues well going forward in competition.
I now join my former partners on this venture, already in retirement.
Proper Pina Coladas on me fellas!

His next bout at UFC 194 saw him knockout Jose Aldo inside 13 seconds to take the featherweight title.

A loss to Nate Diaz at UFC 196 in his welterweight debut was his first in UFC and halted a 15-fight winning streak but the Irishman won a rematch five months later.

After the success at UFC 205, McGregor opted to take time away from MMA and it was during that hiatus that he took on Floyd Mayweather in his first professional boxing match.

‘The Money Fight’ was a lucrative affair — with more than a million pay per view buyers in the UK and four million in the United States, with the American defeating his opponent in the 10th round by TKO.

McGregor’s post on Tuesday morning is not the first time the Dublin-born fighter has spoken of calling it a day. In a 2016 post, he wrote: “I have decided to retire young. Thanks for the cheese. Catch ya’s later.”

He also said during an appearance on The Tonight Show with Jimmy Fallon on Monday that he was in discussions to fight this summer.

“We’re in talks for July,” McGregor told Fallon in quotes reported by MMA Fighting. “So we’ll see what happens. A lot of politics going on. The fight game is a mad game. But again, like I said, and to my fans, I am in shape and I am ready.”

However, he admitted that he did not need to fight from a financial standpoint as he promoted his brand of whiskey.

“I’ve done a lot, I’ve fought a lot,” McGregor added. “I’ve never pulled out of contests. I’ve gone through some crazy injuries, some crazy external situations that many a man would sprint for the hills if it happened to them. “But I stood firm, (I’ve) done my piece for the company....Like I said, this whiskey is my baby. I have a lot of great entities. I don’t necessarily need to fight. “I am set for life, my family is set for life. We are good. But I am eager to fight. So, we will see what happens. I’m just staying ready, as I like to say.”

McGregor was arrested and charged with robbery in Miami earlier this month after allegedly stamping on a fan’s mobile phone. He was filmed in Brooklyn last April throwing a steel dolly through the window of a bus which had a number of UFC staff and fighters on board. A number of people were injured in the incident.

The fighter reached a plea agreement with the District Attorney. He originally faced a possible 12 criminal charges, including two counts of criminal mischief. His plea agreement included paying full restitution to the bus company for damages, completing five days of community service and attending an anger management programme. - PA

1 Gerry Thornley: After 32 weeks the Six Nations is back up for grabs
2 Extremes of sweet and sour for Solskjaer as Man United show signs of revival
3 Stockdale and Ringrose on board with expansive Irish game plan
4 GAA expected to go ahead with championship under Level 5
5 Bennett girding his loins for impossibly unpredictable Vuelta
Real news has value SUBSCRIBE
Here is your handy guide to sport on television this week