‘Conor McGregor ate my €5m Leprechaun! And 10 reasons why he hates Man Utd’

Tipping Point: Why the all-engrossing era of clickbait is bad news for minority sports 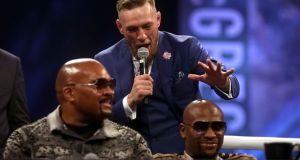 Conor McGregor and Floyd Mayweather during the press conference at the SSE Arena in Wembley, London. Photograph: Scott Heavey/PA Wire

Ah, made you look; job done. It’s rubbish, obviously. Even in a post-truth world everyone knows ‘Themcgregornator’ is a United fan. But as clickbait it’s the business. And this is BIG business. So Kerrching – Tot For Me Boy!

You get one go at hooking your audience in this game. Often with just a single line. And that means tying plenty of recognition to it. It doesn’t matter how shallow the cast as long as you hook. And sport is no different to anything else when it comes to relying on tried and trusted bait.

So McGregor is gold. He’s click-catnip. People can’t get enough, to the extent he can’t not be in anything. Eventually everything comes back to McGregor. You think he’s gone and he comes right back. He’s like headline herpes.

Just sit back and squeeze those advertising-friendly hits for all they’re worth.

And they’re worth a lot. It’s an industry. There are courses available on luring geo-behavioural targeted contextualised ‘eyeballs’.

Boil it down though and it’s basically snappy ‘names’ that engage as mass an audience as possible which you can then pitch advertising to: there you go, a three-year media studies course in one paragraph, for nothing.

Irish sport has its particularly reliable click-streams. Rugby is very zeitgeist right now, especially if it comes laced with a touch of Leinster-Munster. Throw a house price into the equation and you’re made. So for instance, ‘Sexton wrestles O’Gara in pesto over €2 million luxury apartment’ wins.

So does ‘Dubs reject dividing into four different teams to give culchies a chance’. Or ‘Rory McIlroy feels more Irish than British today’. And if things are slow there’s always a variation on the ‘Dunphy says Wes is a misunderstood genius’ theme.

Nothing different there you might say. Freddie Starr never did eat a hamster. Such headlines were always tools of the trade for geezers too pickled to leave the office and liked to believe they were Picassos of Pun. Grabbing public attention is what it’s always been about.

What’s different now is the precision involved. Once there was a certain vagueness to what worked in the relationship between topic and advertising. Now it’s traceable down to the last algorithmic detail. And that’s ominous for the coverage of a lot of sports but especially those labelled ‘minority’.

It’s a very old crib that they get a raw deal in terms of mainstream media coverage. In fact one of the virtues of the new digital landscape was how it would release their glory to mass audiences and bypass old editorial chains.

Yet little seems to have changed judging by a recent encounter with a racquet sports grandee who bemoaned how Irish tennis’s only visit to prominence recently has been a bloke fitting his arse into a skirt.

Inevitably he also enquired about the McGregor fight, and with a distaste which suggested he might have been asking for directions to an STD clinic. Why is it everywhere, he asked, before dismissing next month’s mammoth hard-sell with a word that rhymes with ‘whiteology’.

And he’s right. It is ‘whiteology’.’ It’s ‘whiteotology’ that gets clicked. Which means traffic which sells. It might pander to the lowest common sporting denominator but across the vast media spectrum a hit’s still a hit in any language.

Except there’s a broader perspective to the impact of such precise pandering on sports in general. Because if popularity is everything, with merit counting for little or nothing, then minority sports will ache even more than before for meagre slices of vindication.

For instance, arguing that Hermione Double-Barrel deserves attention because she can get her dressage horse to sashay sideways into a Lexus is well and good. The same if a home-grown badminton champ makes it among the top 10 in the world.

But if there’s no traffic there’s no commercial pay off and sentiment that occasionally made allowances for stories purely in terms of their own merit doesn’t count for much on balance sheets which tot up precisely where traffic goes.

Instead more and more resources get steered towards guaranteed audiences in a self-perpetuating loop justified in advertising terms down to the very last click. It’s like giving tax cuts to the super-rich and there’s a bottom line consensus which can make merit arguments redundant.

It has turned popularity into the ultimate currency, even when it’s dressed as criticism, like taking something popular and poking at its stereotypes. It’s still pressing the same old machine really, just by pushing different buttons. Everyone does it, yours truly included.

But there’s a homogeneity to this which is making the admittedly old-fashioned but still vital virtue of scepticism increasingly redundant.

This McGregor-Mayweather thing really is ‘whiteology’. It’s as cynical and tasteless a piece of manipulation as the sports business has thrown up in a long time. But it’s cheap, reliable and keeps circling that traffic roundabout with near-tyrannical precision.

So from a business point of view, there’s nothing not to like. Popularity corresponds to value so where’s the percentage in bucking the trend, either with criticism or in any alternative inclination. As for merit, you can place it as far down your own Top 10 list of priorities as you want.