TV View: Sky succeed in turning Open into another another tour event 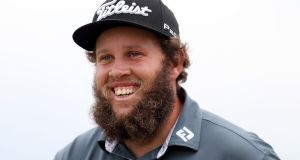 Andrew ‘Beef’ Johnston during the third round of the British Open at Royal Birkdale. Photograph: Andrew Matthews/PA Wire

Kevin Na. On television, his methodical approach to the game of golf shakes Butch Harmon to his very core.

Harmon, confidante to the stars as a swing guru – he keeps telling us – is as folksy as it gets on Sky Sports’ coverage of the Open Championship.

“We have a programme called 60 minutes,” observed the American during proceedings at Royal Birkdale. “It would take that guy right there an hour and half to watch it.”

Boom. Boom. Sniggers in the commentary box. At home we sniggered too for calling him out – slow play in golf is the re-set scrum in rugby, a stake through the heart of the game.

A crude comparison is that Harmon and sometimes Rich Beem are the Sky equivalent of the BBC’s Peter Alliss, without the off colour remarks about women that had become the forte of Alliss meanderings prior to The Open jumping ship from the BBC in 2016.

This has been the second year of the “Sky Open” and congratulations they have seamlessly morphed it into another PGA event, a kind of more important version of The Waste Management Phoenix Open.

In that Sky Sports has reached to the golf coverage chest and pulled out ‘how best to do a four day golf tournament.” Et voila.

The broadcaster has put The Open in the same can but with a different label. All else from the logos and music to format remains comfortably similar.

No longer do we get Sue Barker up in the home of Sandy Lyle by the side of a lake in the Highlands, sitting in a stuffed chair by a flaming fire as it’s the British summer, feet up with a glass of Glenfiddich warming in his hands, an Airedale Terrier by his side and Barker asking him just what it is like to hold the Claret Jug.

They would have travelled to wherever it is Beef hangs out and turned him into an impossible rebel; a hipster of the links with his slovenly appearance and his open, adorable personality.

Beef prefers bottles of beer and burgers with the boys – in golf almost subversive in comparison to the PGA prayer meetings and Trump golf resorts.

Like the BBC or loathe them The Open would have become one half of the great British summer two-hander of golf and Wimbledon with just four days of separation. Shot through with a retch-inducing nationalism but dreamy and wholesomely old school, they give the competition volume and placement on the golfing calendar, something inalienably different to the Farmers Insurance Open.

Tennis player Venus Williams, 37-years-old, has earned $31,885,201 in career prize money. Not bad for golf given Spieth was born one year before Williams began her career as a professional in 1994.

The backdrop to all the smiling faces this week is how Sky lost rights to broadcast the US PGA Championship, so change is happening quickly. Last week Twitter was reported to be in talks to screen the final Major of the year.

The social media company held negotiations to obtain the digital streaming rights to the 2017 tournament for the UK. This year the group won the rights to live stream 31 smaller PGA tour golf tournaments around the world but has never shown one of the sport’s Major competitions.

We live in interesting times.

You may not be an addict for American news channels in which case missing The Super Bowl this week might have been easy. That is the Super Bowl of parole hearings and the delusional arrogance that nine years in prison hasn’t ironed out of the 70-year-old OJ Simpson.

On release in October, the former NFL superstar has chosen to live in Florida where the $25,000 a month pension from his iconic days in football has been accumulating.

Poor me indeed. Simpson slipped prison time for the alleged murder of Nicole Simpson and Ron Goldman but in a civil suit the family of the murdered pair won gazillions from the Simpson estate. He was in prison for a different offence.

Simpson was everywhere this week, seen and heard in his blue prison uniform pleading his goodness while inside.

You’d have to say luck has been with him. The chance of blood found on his sock not belonging to slain wife Nicole was 9.7 billion to one, greater that the world’s population. The jury believed different.

Can you feel a TV reality show in your bones? Times are changing.