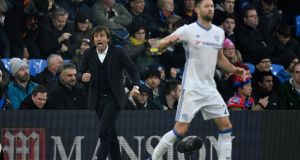 There is near unanimous agreement between predictors that Chelsea, under Antonio Conte, will win the 2016/’17 English Premier League title. Photograph: Reuters.

As the American historian Rick Perlstein once put it: “Let there be a special place in hell for pundits who make predictions.”

Now, we wouldn’t wish such a fate on any of our considered experts from this time last year but it should be pointed out that either the crystal ball was cracked or their soothsaying was prone to the same disease of unpredictability that fashioned such political shocks as Brexit and The Donald’s presidential win.

If 2016 was a bumper year for sports fans with the Olympics and Euro 2016 gripping the nation, the sad fact is that not one of our experts foresaw how the Irish boxers would implode at Rio – most had tipped multiple medals, with Katie Taylor, Mick Conlon and Adam Nolan all apparently destined to stand on podiums – and none predicted Portugal’s remarkable run to victory in the Euros.

Nobody had insight into how a tiny mosquito would mean that golf’s return to the Olympics would go ahead without medal prospect Rory McIlroy or Shane Lowry even getting to Brazil due to fears about the Zika virus, or that two rowing brothers from west Cork would pull like dogs to capture our hearts and minds and claim a silver medal in the process.

So, hopefully, there are no cracks in the crystal ball as our wise men and women look to the sporting year where, if you’re tempted, our racing correspondent Brian O’Connor lets us in on his ante-post bet for next year’s Epsom Derby. He’s already got Titus at 50/1 for the big race . . . a price that’s already plunged to 20/1 and falling. Time to get on?

Anyway, the one “certainty” of the coming year is that Chelsea will romp home to the English Premier League title with all bar two of our experts plumping for Conte’s men in blue. The two dissenters – champion jockey Davy Russell and IT rugby correspondent Gerry Thornley – go for Manchester United and Arsenal respectively.

There’s not quite the same level of consensus when it comes to who will lift the Sam Maguire in 2017. Although Dublin are chasing a three-in-a-row of titles, Kerry, Tyrone and Mayo – can they break the curse? – are all shouldered with the weight of expectation. Time will tell.

And time will tell just how much home turf will count in Ireland’s quest to claim the Women’s Rugby World Cup. Our Olympic silver medallist Annalise Murphy is one of those who plans on donning an Irish jersey – not to play, but to support the team – for the tournament where holders England, Canada and New Zealand are tipped by our experts to be the main title contenders.

1 Game Changers: Gary O’Toole took a stand when others turned their heads
2 Gerry Thornley: Munster will make for interesting case study when rugby resumes
3 Georgia and Fiji in line to join Six Nations sides in eight-team tournament
4 James McClean says he gets no support for abuse he receives
5 Roger Wilson tackling the problem of bad technique in Texas high school football
Real news has value SUBSCRIBE
Here is your handy guide to sport on television this week