From a fry-up and a few pints to protein supplements and pasta, it's different these days 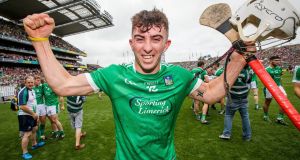 Limerick’s Aaron Gillane celebrating after winning the hurling All-Ireland final in August 2018. He had his usual breakfast made by his mother that morning. Photograph: Ryan Byrne/Inpho

It was the night before the 2018 All-Ireland senior hurling final, and a realisation dawned on Limerick’s Aaron Gillane: his mother would not be around to cook him his usual pre-match breakfast.

She and his father, brother and sister had already travelled up to Dublin to stay in a hotel the night before the Croke Park showdown with Galway, and Gillane was now at a loss because his routine of a lifetime was thrown out of kilter.

Some 24 hours later the 22-year-old would be celebrating Limerick’s first All-Ireland title in 45 years, and, despite it all, his routine had not been broken.

“My mother drove back down on the Saturday night so she could make my breakfast the next morning. Just to keep the routine.

“She makes my breakfast before every match; three poached eggs and three rashers. I shouldn’t be telling Joe O’Connor that, but it did the trick for me. Routine is important, ticking the boxes. You try to do the same thing before every match. It does help to settle the nerves, gives you something else to think about other than the match.”

That’s certainly dedication from Mrs Gillane, and it shows just how crucial routine is for sportspeople, particularly when it comes to food.

A six-time All-Ireland winner with Kerry, Darragh Ó Sé saw plenty of changes in how intercounty teams dealt with nutrition from the start of his career in 1993 until retirement in 2010.

“If you had a home game you’d have your own breakfast in the morning which, back in the day, would consist of a fry or whatever. But, funny enough, even until the end of my career I’d have a few eggs in the morning, but it also depended on the time of the game.

“Whether you wanted to or not you were told to eat at a certain time, and you had no control over that. I remember an hour before the game having tea and sandwiches – the worst thing you could be having with all that white bread in your tummy when you’re playing. I remember before the Munster final in 1997 in Limerick we had sandwiches before and sure afterwards half the team was sick. The only fella that didn’t get sick was the fella who drank too much after the game because that must have killed the bug!”

One of the biggest controversies to come out of the Manchester United camp shortly after the ill-fated David Moyes took over as manager in 2013 was that he had banned chips at the Carrington training ground canteen.

Now, it would be a fair assumption to make that top-level professionals at one of the biggest football clubs in the world should not be eating chips, but this one did not go down well. Moyes said he did it “because a couple of players were overweight, and I didn’t think chips were good for their diet”, but it rankled so much with Rio Ferdinand in particular that the defender still seemed aggrieved when he wrote about it in his autobiography years later.

“It’s not something to go to the barricades over [the chips]. But all the lads were p****d off,” Ferdinand wrote. “And guess what happened after Moyes left and Ryan Giggs took over?

“Moyes has been gone about 20 minutes, we’re on the bikes warming up for the first training session and one of the lads says: ‘You know what? We’ve got to get on to Giggsy. We’ve got to get him to get us our f*****g chips back’.”

Chips were a long-time staple of professional football teams throughout the years, with steak and chips or egg and chips being two of the main pre-match meals of choice throughout the 20th century. Steak in particular was thought to provide the energy needed for a 90-minute football match.

In his autobiography Jimmy Greaves describes “heading off to Moody’s cafe in Canning Town where we would order our pre-match meal of roast beef and Yorkshire with all the trimmings or pie and mash followed by blackcurrant crumble and custard”.

Keep in mind this was at a time when players would reluctantly not drink alcohol the night before a match, but every other night of the week was fair game. It’s a wonder they could even move on those muddy pitches after all of that.

The liking for red meat went across all sports, with the 1949 US Ryder Cup team turning up in England armed with 600 steaks, six hams, 12 sides of beef and four boxes of bacon to sustain themselves and their wives for the month that they would spend on this side of the Atlantic. It was quickly daubed “Meatgate” by the British press, and became the main news story in the build-up to the event.

Over the years red meat before matches has turned to white, with chicken alongside pasta or rice becoming the trusted forms of slow-releasing energy.

“There were definitely huge changes over the years, even just in the intake of water to stop dehydration,” Ó Sé says. “That was relatively ignored when I started off in 1993. You were told to drink water but it wasn’t kind of overseen. It became more protein-based with rice and pasta and things like that.”

Salty rashers don’t exactly come under the category of protein-based, and are far from the ideal food to be eating to stay hydrated, but, as Gillane showed in August, bacon is a perfectly acceptable way to start the day when you’re ending 45 years of hurt.