Benefit fund for Seán Cox has raised €1.1 million so far 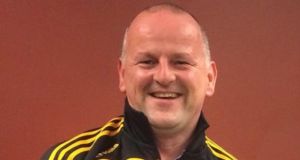 Liverpool fan Sean Cox was attacked outside Anfield by Roma supporters before a match in April Photograph: Facebook

Martina Cox – wife of Irish Liverpool fan Seán Cox who was attacked by Roma fans outside Anfield last April – has issued a statement thanking the public for their huge support which has seen the Support Seán campaign raise €1.1 million to date to help with his treatment.

Cox (53), from Dunboyne in Co Meath, is still recovering in hospital after he suffered a severe traumatic brain injury when he was assaulted ahead of the Champions League semi-final between Liverpool and Roma on April 24th.

Recently Jürgen Klopp, Séamus Coleman and AS Roma themselves have donated to the fund which will provide him with the treatment he needs at the National Rehabilitation Centre in Dún Laoghaire as well as the long-term care he will require.

Recently there was €80,000 raised at a benefit match between Meath and Dublin at Páirc Tailteann.

In the statement released by his wife she outlines how he is beginning to eat normally again and that progress is slow but positive.

“We spent a lot of time over Christmas with Seán in the National Rehabilitation Hospital, Dun Laoghaire, where he is continuing to make progress,” the statement reads.

“He no longer has a feeding tube so is starting to eat and drink again with the help of the wonderful nursing staff. Seán has some more words and is trying very hard to sing along to familiar songs; these are encouraging and proud steps for us all.

“Our family used the time with Seán over Christmas to try and relay to him the public goodwill and support there has been for him over the eight months since his attack. We have shown him social media posts, press clippings and videos from fundraising events across Ireland, England and further afield, the GoFundMe page and the SupportSean.com website, letters and signed jerseys all in aid of Sean and his recovery.

“This time last year we were an ordinary family looking forward to another New Year and what that would bring. Seán or I never dreamt that twelve months on, there would be websites or media interviews or fundraising events all brought about by what happened after Seán was attacked in Liverpool on 24th April.

“While it has been an exceptionally difficult time, what has helped me and the kids get through it has been the overwhelming goodwill of Seán’s family, friends, supporters and the general public. The Support Seán campaign has witnessed huge generosity and has raised €1.1 million to date. People whom we have never met have been there for us in so many, many ways, alongside our family, friends and local community. While we have a battle ahead again in 2019, our burden is lightened by this love and support for Seán.

“Thank you for everything you have done for Seán, our family and me during 2018. To the communities of Dunboyne, Dublin, Ireland, Liverpool and many other places across the world; to people who took part in events for Seán, organised fundraisers or donated online; to the child who sent five euro of their pocket money in an envelope to our house; we owe you a debt of gratitude. Thank you and Happy New Year.”