America at Large: Time-worn Wonderlic still adding up for NFL 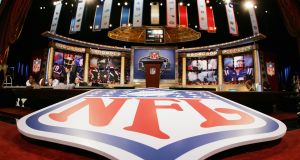 Clubs take a bizarrely comprehensive approach each April when trying to figure out which of the best college prospects may be able to cut it in the more demanding professional game. Photograph: Chris Trotman/Getty Images

Pat McInally played 10 seasons in the NFL with the Cincinnati Bengals, seeing service as both a punter and a wide receiver, but his footnote in sporting history has nothing to do with peculiar double-jobbing.

A few weeks before the 1975 Draft, McInally took the Wonderlic, a 12-minute 50-question multiple choice test designed to evaluate short-form cognitive abilities, and snagged a perfect score of 50. Nobody had ever aced it before. Nobody has managed to do so since.

Most players average around 19. Most Americans who take it for job-screening usually notch two points higher.

Some coaches later told McInally the flawless performance was a little unnerving, scaring them away from selecting the Harvard graduate until the Bengals eventually plumped for him in the fifth round.

An athlete who’s too smart is, it seems, a much more daunting prospect than one too dumb. In its way, that sort of counter-intuitive thinking sums up the bizarrely comprehensive approach clubs take each April when trying to figure out which of the best college prospects may be able to cut it in the more demanding professional game.

There are interviews where they ask all manner of probing questions.

“Is it true your mother is a prostitute?” one scout asked the Dallas Cowboys’ Dez Bryant.

There’s a battery of quantifiable physical ordeals that include a 40-yard dash, a vertical leap, a broad jump and seeing how many times somebody can bench press 225lbs. Everything is designed to bring some sort of pseudo-science to the art of decoding which unproven talent is worth punting millions of dollars on.

At the Philadelphia Museum of Art on Thursday night, the Cleveland Browns, as the worst team in the sport last season, get to pick first from the incoming crop of undergraduates.

For weeks, speculation has centred on whether they will opt for Myles Garrett, a defensive end out of Texas A&M, or Mitchell Trubisky, a quarterback from the University of North Carolina. As the clock has ticked down, Garrett, the acknowledged best athlete available, has gained the upper hand, helped at least in part by the leaking of the fact he scored 31 in the Wonderlic whereas Trubisky notched a less impressive 25.

Never mind the extensive highlight reels of on-field plays that both men have amassed, Garrett may be regarded as the surer thing because he was better at navigating a battery of questions based on mathematics, English and scientific concepts.

Forget the fact the defensive end is a physical freak capable of terrorising quarterbacks, all that matters to some is his superiority at figuring out puzzles such as: A boy is 15 years old and his sister is twice as old. When the boy is 25 years old, what will be the age of his sister?

Or the more wordy challenge.

Pride is the opposite of 1. Reserve 2. Self-esteem 3. Self-abasement 4. Disdain 5. Arrogance.

Created by Eldon F. Wonderlic, a graduate student in psychology at Northwestern University, in 1936, it was used by the US Navy during World War II and soon became a feature of personnel evaluation across a variety of American industries.

Groundbreaking coach Paul Brown introduced it to the NFL during his time with the Cincinnati Bengals in the late 1960s although it was the Dallas Cowboys’ Tom Landry who popularised its use as a device for evaluating draft prospects in the 70s. In the decades since, questioning its validity has become a spring ritual.

“If a team wants to place a premium on selecting ‘smart’ players, then why not give everyone a test?” wrote Dr Edward Krupat, director of the centre of evaluation at Harvard Medical School, in an essay for Sports Illustrated recently.

“If nothing else, the Wonderlic puts players under time pressures and requires them to have the ability to read. But will a large vocabulary help the next JJ Watt get to the quarterback? Should the next Aaron Rodgers have a better understanding of calculus than his peers?

“Dan Marino got a woefully low score of 15, but no one ever accuse him of not being smart enough to find open receivers. Ray Lewis wasn’t much better, with a score of 16, but that didn’t seem to keep him from outthinking offensive co-ordinators and stuffing runners in the backfield.”

Krupat’s point is underlined by many other stark contrasts.

Tom Brady, the greatest quarterback in the history of the sport, scored 33 in 2000. An excellent number that suggests teams should have taken a chance on him long before the sixth round, until you consider that Johnny Manziel, one of the biggest draft busts of recent years, notched 32 three years back.

Whatever else can be gleaned from the test, performing well with a pencil between your fingers doesn’t always translate to delivering with a ball in hand. And vice-versa.

Four years ago, the NFL sought a more accurate metric and introduced the Player Assessment Tool, a 50-minute test that claims to offer more profound insights into an individual’s thinking styles, learning methods and motivation.

It’s too early to say whether this is an improvement that could one day usurp the Wonderlic’s stranglehold on the draft and diminish McInally’s place in folklore.

After his playing career ended, he made a fortune from California real estate, toys and a stint as head of marketing for . . .Wonderlic. The exam was, at the very least, spot-on about predicting his future success.