Is LaVar Ball the worst kind of sports parent? 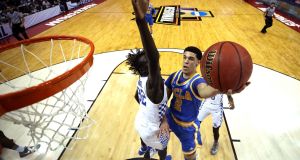 Lonzo Ball (right) is expected to be a top three pick in this summer’s NBA draft unless clubs are scared off by his father’s antics. Photograph: Andy Lyons/Getty Images

As he worked on his shooting before the Cleveland Cavaliers took on the Chicago Bulls last Thursday, LeBron James did a rather strange thing. Instead of unfurling the flawless technique that has scored nearly 29,000 NBA points, he changed to an awkward, ungainly shooting motion recently made infamous by the UCLA point guard Lonzo Ball. Taking time out from his meticulous pre-match routine to mercilessly troll a 19-year-old prospect was out of character for James but perhaps an inevitable consequence of the increasingly crass behaviour of Ball’s father.

During a months-long media rampage designed to promote what he perceives to be his family’s brand, LaVar Ball decided to throw a few barbs at LeBron’s eponymous 12-year-old son who just happens to be a basketball prodigy. Those egregious insults came somewhere in between Ball declaring his own eldest boy was going to be better than Stephen Curry one day, and that he himself could defeat Michael Jordan in a game of one-on-one.

The puerile boasts of a deluded character afforded too much airtime and column inches by a media that can’t help indulging a braggart. In many ways, this is a strangely Trumpian fable about modern sport. He who shouts loudest gets the most coverage.

LaVar Ball is 48-years-old and works as a personal trainer. Following an undistinguished basketball career with Washington State and Cal State, he was, at six foot six, athletic enough to later try to make a living in professional football, an effort that peaked with a season as a tight end with the London Monarchs of the World Football League and a couple of spells knocking around NFL training squads.

Hardly the stuff of anybody’s dreams. No matter. Ball had an alternative plan for taking over the sports world. It involved his wife Tina, a former college basketball player herself and a woman he now admits he courted in college because of “her length, height and breeding hips”.

“That’s why I married my wife,” said Ball. “Before they [his kids] even came out the womb, I said, ‘I’m having three.‘ And with the way I’m built, and the way she’s built, I knew I was going to have three killers. So this thing was planned long ago. Because I knew if you put two basketball players together, this is what you’re going to get. I knew this is what we were going to get.”

The amateur genetic engineering delivered three boys, Lonzo, LiAngelo and Lamelo, and their rise to prominence at high school and collegiate level in California over the past few years has given him the fame he so obviously craves. He’s never met a microphone he doesn’t want to grab and tell the story of how he shaped and moulded the trio from a young age. In this regard, his cause is helped by the fact the kids do have serious talent.

Ball is the inevitable culmination of the past couple of decades in America, a time that has seen the overbearing sports parent become an unfortunate fixture on the landscape.

Unless clubs are scared off by his father’s antics and apparent determination to annoy icons at every turn, Lonzo is expected to be a top three pick in this summer’s NBA draft. LiAngelo will start for UCLA next season while 15-year-old LaMelo (potentially the best basketball player ever according to, who else, his father) recently scored 92 points in a high school game. For all the ability, their biggest problem may be living up to the ludicrous hype he has foisted upon them.

There is a sense Ball is the inevitable culmination of the past couple of decades in America, a time that has seen the overbearing sports parent become an unfortunate fixture on the landscape. More and more fathers, and sometimes mothers, blinded by the dollar signs in their eyes, are so bent on rearing the next superstar that the hothousing of the prodigy often begins in pre-school. By the time the kids reach their early teens, values and normality are sacrificed in the quest for headlines. That LaMelo scarcely played defence and threw up 61 shots in the match where he scored 92 was a classic of that selfish genre.

Ball is not the original of this species just a new mutation. After all, Eldrick Woods came out with some pretty outlandish stuff about how his son was going to change the world. And nobody believed Richard Williams when he made the ridiculous claim that his daughters were going to spring from a glass-strewn court in South Central to take over tennis.

With three children in his charge though, Ball has three times the spotlight and three times the earning potential. There is a reality television show already in the works, a clothing company called “Big Baller Brand” that sells t-shirts for $57 each, and a desire to negotiate the biggest shoe deal in sports history.

For all his bloviating, Nike have expressed interest in sitting down to talk with him even if the youngest son can’t turn pro for at least four more years.

“Some people call him crazy,” said Lonzo. “But everything that he’s said, it’s pretty much come true.”

What else would you expect the kid to say about his father?