After 12 concussions, Merril Hoge’s stance on CTE is truly head-wrecking

America at Large: Former running back forced to retire is challenging real science 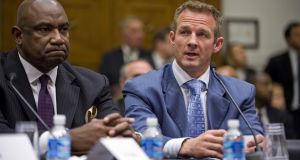 The scene was Soldier Field on October 2nd, 1994. A running back with the Chicago Bears, Merril Hoge, was blocking on a play when a thunderous hit from a Buffalo Bill bent his facemask, gashed his chin and ended his career. He didn’t remember walking off the field and, while getting stitched up in the lockerroom, he collapsed, lost consciousness and his heart briefly stopped. When he woke up in the intensive care unit of a local hospital, he didn’t recognise his wife or his brother and didn’t know he had a 14-month-old daughter.

“I was basically confined to my home for months,” said Hoge of the lingering mental and physical problems from that one collision at age 29. “I couldn’t leave. You could have taken me around the block and asked me to get home, and I wouldn’t have had a clue. I had to learn how to read again. The reading process took me a long time. I literally started over from children’s books. It took me a couple years.”

That was Hoge’s 12th concussion since high school, his second in just six weeks, and he later successfully sued the Bears’ medical staff for failing to keep him off the field following his initial diagnosis earlier in the season. Against that background, it’s somewhere between ironic and bizarre that Hoge has co-authored Brainwashed: The Bad Science Behind CTE and the Plot to Destroy Football! – a new book that rather preposterously attempts to call out those claiming gridiron causes brain injuries.

“I went on a quest to find out what the truth was,” said Hoge, “and it was on that journey that I could not believe the discrepancies from what the science really says and what the experts really say versus what we see in the headlines.”

Among Hoge’s many ludicrous contentions is that Dr Ann McKee’s ground-breaking investigation in 2017 which found the degenerative brain disease, chronic traumatic encephalopathy (CTE), in 110 out of 111 former NFL players didn’t include non-athletes for comparison. A point kind of undermined by the fact an earlier Mayo Clinic study found no evidence of CTE in the brains of 198 individuals who had never played the game. Not to mention that even the league itself, so long in denial about concussions and brain damage, now acknowledges the link between the sport and the condition is real.

Playing the part of the contrarian is nothing new for Hoge. He has been at this lark since the NFL first came under scrutiny for the preponderance of its alumni dying young from brain issues. When Kurt Warner, the quarterback who famously went from stacking supermarket shelves to leading the St Louis Rams to a Super Bowl, said he’d prefer his kids not to take up football, Hoge, then an analyst for ESPN, denounced him. He called Warner irresponsible, extremely uneducated, and accused him of throwing “the game that has been so good to him under the bus”.

A ridiculous statement that looks worse now that Hoge’s own son Beau, a talented college footballer, has had his progress stymied by, you’ve guessed it, multiple concussions. Never mind, his father’s argument has been lent a modicum of credibility by the fact his co-author, Dr Peter Cummings, is assistant professor of anatomy and neurobiology at the Boston University School of Medicine. Boasting a rather eclectic resume, including a novel called The Neuropathology of Zombies, Cummings made national headlines last year with an essay defending his decision to allow his own child play tackle football even though most of his peers in the medical community frown upon it. Like Hoge, he believes the sport is safer than ever now because of new tackling techniques.

“In the book, he [Hoge] touts Steelers head coach Chuck Noll as the technical inspiration for Heads Up, the “safe” way to light a motherf**ker up,” wrote Nate Jackson, a former NFL player turned author in a coruscating rebuttal on Deadspin. com. “Same foot, same shoulder. Hoge assures us that the kids are in good hands using the methods of the longtime coach of Mike Webster – the Steelers center whose degenerative brain disorder got so bad that by the end he was tasering himself to fall asleep.”

Hoge and Cummings have produced a publication that, unintentionally, captures the zeitgeist in Trump’s America, the pseudo-news universe where true expertise must be constantly attacked. Most of their book is counter-factual, anti-science nonsense, even at one point comparing hits on the field to the blows incurred during a pillow fight. It is the sporting equivalent of those naysayers who reckon one winter blizzard definitively proves that global warming cannot possibly be a thing.

There is also the implication throughout (the use of plot in the title is a giveaway) that some sort of grand snowflake-led conspiracy is afoot to undermine America’s manliest game. After all, it couldn’t just be conscientious doctors trying to protect the long-term welfare of its participants at every level from kids to the pros.

While Hoge and Cummings are busy trying to turn back the tide of common sense, the number of students playing high school football on Long Island is down nearly 15 per cent from 2016. At middle school, for boys aged from 12 to 15, the drop is even steeper and more than one principal has had to cancel the sport altogether due to lack of interest.

Whisper it, real science may be winning.

1 Monica Seles: The warrior queen who could have been the best ever
2 Billy Morton’s Santry Stadium a beacon for sporting endeavour
3 Andrew Porter: Introducing contactless contact sessions
4 Leicester seek to flatten their dismal curve and end season on a high
5 Red Bull poised to protest over Mercedes’ new steering system
Real news has value SUBSCRIBE
Here is your handy guide to sport on television this week