"People ask where to get started with Irish whiskey. The first port of call is the label"

There’s plenty to learn about whiskey according to Ger Garland, whiskey ambassador at Irish Distillers, and single pot still Irish whiskey is a good place to start 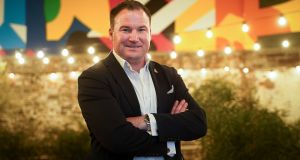 Ger Garland is an award-winning whiskey ambassador at Irish Distillers.

The Irish whiskey market has seen a surge in recent decades, after a period of near extinction in the latter half of the 20th century. As the industry has made a return to the days of international success, the range of whiskeys coming from Ireland has expanded, and with specialist bars and off-trade shops dedicated to whiskey, it can be understandably perplexing for a newcomer to tell your single malt from your single pot still.

Dave McCabe is a blender at Irish Distillers, and is responsible for overseeing the process that gives many of the leading Irish whiskey brands their unique flavour. Before stepping into the world of whiskey production, McCabe helped to establish the Irish Whiskey Academy, an educational centre at Midleton Distillery that serves to give training to people working in the drinks industry, as well as enthusiastic fans of the drink.

“Historically, single pot still Irish whiskey was considered to be one of the most popular styles of whiskey in Ireland,” says McCabe, “and what defines that style is the process of distillation.” At Midleton, the process starts with the grain, using a mash of malted and unmalted barley, which is then distilled in traditional copper pot stills. Both the mixture of barleys, and the type of still used play a defining role in creating the aroma and flavour of the drink, McCabe explains, in contrast to spirits created using different types of stills or made from an all malt mash for example. The term ‘single’ simply means that it has been distilled completely on the site of one distillery.

After distillation the spirit is then aged in wooden casks. “There are some other important factors that really contribute to the flavour,” he says. “During its time in the barrel, the spirit develops its colour, but also additional flavours, which come from the type of wood used to make the barrel, and from what was previously kept in the barrel.”

Irish whiskey traditionally has always had an influence from casks previously used for ageing wines such as sherry, which can add the aromas and flavours of dried fruits, with even a hint of nuttiness. Another popular type of cask used today is the American bourbon cask, which can impart notes of vanilla, caramel, and clove.

“The final factor is how long the spirit is aged for,” says McCabe. “When you see a number on the bottle, such as a Redbreast 12 Year Old, that bottle is made up of whiskeys aged in barrels for a minimum of 12 years. But there can be whiskeys in that mix that could be aged for 13 or 14 years, sometimes even older.”

Armed with an overview of the process, it makes it a little easier to make a choice. Ger Garland is an award-winning whiskey ambassador at Irish Distillers. “I started working here nearly two decades ago in merchandising, and at the time I can say I didn’t know much about the process but I began to get very curious about it and my love of it really accelerated, so I became an ambassador,” he says, “I am basically a whiskey nerd.”

“People often come to me to ask where to get started with Irish whiskey. Usually they will have tried a premium blend like Jameson, and they might not know much about it, but they know that they like it and they want to know more.”

For Garland, there are some obvious routes to becoming an aficionado that are often overlooked. “It is very simple, but the very first port of call is the label on the bottle. The blenders put a huge amount of work into crafting and writing notes on the flavour of a whiskey, so much of the key information - its style, its smell, its finish - is on the bottle, so it’s important not to overlook that.”

“Another obvious but underutilised way to get information is from the bartender or specialist that you are buying it from,” he says. “A lot of the time people in these positions work very hard to educate themselves on the spirits that they sell. So asking them for a little bit more information on a drink can lead to surprising results.

“When it comes to where to start, for me, single pot still Irish whiskey is a really unique style of whiskey, and at the heart of the Irish whiskey trade,” he says. “If you're not a whiskey drinker, or you're looking to introduce someone new to whiskey, then Redbreast 12 Year Old stands out there as a great benchmark for Irish whiskey - it was hugely popular in the past, it is today, and its success is going nowhere in the future. Many people call it “Christmas in a bottle”. It has a real Christmas cake character, as the barrels give it this flavour of raisins, sultanas, and cinnamon. So much about it really lends itself to this time of year.

“Alongside Redbreast, some other great single pot still whiskeys to try are Green Spot, and Powers Three Swallow,” says Garland. “Whiskey can fit every occasion, and certainly when I'm doing a tasting with a group of people, those three tend to be the perfect starting points. They're all different in their own way as they use different types of wood in the ageing process to really highlight the spirit. So those three give people a broad overview of what's available in the style. Plus, they’re on the more affordable end of the scale.”

While some people like to invest in a bottle to share at home, Garland points to an increase in tastings happening in pubs and off-licences across the country. “There are plenty of quality pubs in Dublin where you'll find really amazing whiskey collections. The staff are very knowledgeable and there's no fuss about it, so you don't feel that you're out of your depth. Specialist off-licences are also having regular sample events so they can also be a great place to try something out for the first time.”

“We also have a lot of information available online,” says Garland. “We have a series, The Tasting Club, on Irish Distillers YouTube channel, where a number of different whiskeys are tasted and discussed with the masters and blenders at Midleton Distillery. I suppose my advice would be don't be afraid to jump in, there is quite a lot of depth to it but that means there is plenty to learn and experience and share, and for me that's what makes Irish whiskey so interesting and engaging.”