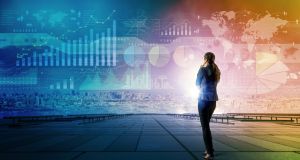 PwC tax director, Susan Roche: “We haven’t had tax reform in the US for over 36 years and this time it has happened in a matter of months.” Photograph: iStock

Against a backdrop of rapid changes in the international tax environment and increasing disruptions to global trade, PwC tax director Susan Roche believes the new norm for business is about making the best informed decisions while operating in an era of uncertainty.

“The pace of change is unprecedented, and this does not look like slowing anytime soon,” she adds. “But businesses cannot keep waiting to see how things will unfold. Failure to make informed decisions can lead to stagnation and companies putting projects on hold. But they can’t pause on decisions forever; it’s all about being as well informed as possible and making the best decision you can, without having all the answers.”

Among the key changes for businesses in Ireland over the past year has been US tax reform. “The impacts can be very different for different companies,” says Roche. “It’s very much dependent on the business model and structure of the individual company. This makes it really interesting. You have to get down to the granular detail of each company to understand the impact.”

She points out that there will be negative as well as positive impacts for Irish businesses with sales to, or a presence in, the US. Higher US tax costs may result from new anti-avoidance rules and interest limitation changes, but these could be offset by the cut in corporation tax from 35 per cent to 21 per cent and other new rules on early expensing of property and other capital costs which can provide a tax benefit.

However, US multinationals based in Ireland are presented with another set of facts to think about. For example, the US has made changes to individual taxation which could make it less beneficial for US nationals to work abroad. It has also become more costly for US companies who relocate employees to overseas locations like Ireland.

“We haven’t had tax reform in the US for over 36 years and this time it has happened in a matter of months. Everyone is struggling to understand the implications of it because of the novel and complex provisions that were introduced,” says Roche. “So much so that the department of the treasury in the US have been bringing out new regulations to provide clarification as to how the legislation should operate. The latest regulations are those released on Global Intangible Low Taxed Income rules. These, by themselves, are more than 150 pages in length, and it just deals with parts of a single provision. There are a lot more regulations yet to come on several other provisions, so the legislation is very much still evolving.”

Her advice to companies is to try to keep abreast of the changes as they happen. “You have to understand your own business model and how it could be affected - that’s the critical piece. But you also have to be aware of the wider political environment as well. The US deficit could reach $1 trillion by the end of the decade and that could have an impact on the sustainability of the tax changes.”

Another bone of contention and source of uncertainty is the EU proposal for a digital tax to be levied on the global internet giants.

“We are entering into a very critical period for this issue,” says Roche. “The Austrian presidency has set it as a political priority and wants it delivered by the end of the year. The proposal gaining most traction is for an interim tax of 3 per cent on certain revenues. This is seen as a total departure from international norms and standards, it being a turnover tax. The Irish Government has acknowledged that it is a significant departure from international norms and needs careful consideration.”

There have also been calls for the EU to look at the broader global perspective and wait for OECD proposals on the issue. “For example, some of the Nordic member states are saying that it could complicate issues globally and that it would be unhelpful to move ahead until the OECD has come up with proposals,” Roche adds. “It could also have an impact on broader US-EU relations as it will mainly be US companies which are affected. The best advice is to keep an eye on what’s happening on this issue around November and December.”

While the Common Consolidated Corporation Tax Base proposal is never far from the agenda in Brussels, Roche doesn’t believe it has made any real progress of late. “This does tend to come up time and time again,” she says. “The Irish Government has been very clear that this is not something Ireland will support. Ireland has been very engaged with the EU on all matters in relation to taxation, but unanimity is required on a fundamental change like this. It is no closer to becoming a reality, as Ireland and some others are clearly opposed.”

Another interesting development has been the adoption of the EU Anti-Tax Avoidance Directive (ATAD). “All EU jurisdictions have signed up to it,” Roche explains. “It implements the recommendations of the OECD Base Erosion and Profit Shifting (BEPS) framework. But the directive provided for a minimum standard and member states are free to go above and beyond that if they wish. This means that companies can’t assume that just because they’re compliant in their home country that they’re compliant in all others that they trade in. You have to do a jurisdiction-by-jurisdiction analysis.”

The incipient global trade wars are a further cause of concern. “I don’t think we have ever seen a trade war which has brought benefits to the international economy,” Roche notes. “We have just seen new tariffs imposed by the US on Chinese goods, to which China is responding. Isolationism doesn’t help the global economy.”

Roche’s advice to companies trying to cope with this unprecedented level of turbulence is to remain vigilant of the big picture, whilst focusing on the specific things that matter to the business. “Try to separate out the nuggets that impact on your business from the wider noise,” she counsels. “Sift out what’s relevant for your business. Look at the impact new tariffs are having on your supply chain, and so on. New tariffs aren’t like tax changes, they can come into force very quickly with little or no warning. You can’t have paralysis by analysis, and sometimes you will have to make informed decisions based on incomplete facts. Stay abreast and on top of the global changes and then focus on those which have the most impact on your business.”

Disruption on the global stage and fluctuations in the international tax environment is changing the way companies operate. If your business operates in America or is looking to invest in Ireland, our international tax experts can help you navigate the uncertainty.

In a world of constant change, trust the leading voice in tax.