In the final part of our Everyday Adventures series in association with Jaguar Land Rover, Donal Skehan, on a flying visit home from LA, takes a sentimental journey through Dublin in the new Range Rover Evoque

Donal Skehan with the new Range Rover Evoque: "I feel so proud bringing Noah home here. It's such a beautiful place" 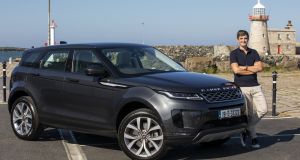 Donal Skehan with the new Range Rover Evoque: "I feel so proud bringing Noah home here. It's such a beautiful place"

“When I was a child,” recalls celebrity food writer and TV presenter Donal Skehan, “I remember my grandfather having two cars - a good one that you were never allowed in and the “banger”. The dogs, my brother and I were bundled into this one and taken to the beaches near Clontarf, where we’d spend most of the day chasing rabbits in the sand dunes and eating ice-creams.”

Skehan paints an idyllic picture of life growing up in North Dublin. Now, driving his own car, a Range Rover Evoque, he takes us on his daily commute from Sandycove to Howth, fondly pointing out some of those scenic spots from his childhood.

Currently, Skehan lives in Los Angeles with his wife Sofie and their one-year-old son Noah. They’re expecting a second child, a boy, in November, something Skehan is very excited about.

He is back in Dublin for a number of weeks to film a new television series for RTÉ, Superfood in Minutes, that will air in the latter part of the year and he also has a cookbook coming out to coincide with the RTÉ show. It’s been a busy time for the chef, but he takes it all in his stride.

“It’s great to be back. As a child I think I can count on one hand the amount of times I set foot on the south side of Dublin. Now this is my daily drive,” he laughs.

Appetite Media has its studio in Sandycove, Co Dublin, where Skehan is currently filming the TV series, and he drives there from Howth every day – a “nice drive at 6am,” but not so good if you hit rush-hour traffic on the way back, he jokes.

The journey is made somewhat easier by the comfort of the interior of the new Range Rover Evoque, a luxury SUV with an in-car entertainment system that helps the commute fly by.

“I stick on a good podcast to listen to,” says Skehan, who uses his drive time to catch up on his favourite plays.

Skehan moved to the US four years ago to work with the Food Network, but he returns home every three to four months for work commitments. He says the pull to return home gets stronger and stronger every time, especially with a new baby on the way and all the “free childminding” that’s available here with his extended family.

“I love Dublin and it’s incredible to see how things have changed, especially on the food scene, with numerous new restaurants opening. I love coming back and seeing new ideas take shape and the Irish take on life that I left behind.

“We left Ireland as just Sofie and I, but now we’re back here with a one-and-a-half-year-old, going to playgrounds, and in a way I feel like I’m coming back as a tourist. I’m showing my little fella these fantastic places that I grew up in for the first time, and it does bring on homesickness,” he says.

He now loves the fact that he can load up the boot of the Range Rover Evoque with a blanket and picnic, and bring his own family to the same beaches where he spent his youth. However, taking a toddler in the backseat is a slightly different experience, a “less relaxing one,” he jokes. “There is a limited amount of time before he kicks off, but if he has his little toy rabbit with him he’s sorted. He has a Swedish CD that goes round and round and we all know the words off by heart at this stage, so that keeps him calm,” he says.

Driving in Dublin is quite a different experience to driving in LA, with those big expansive roads, and if he’s honest, he prefers that. “California is a bit of a novelty but I do love those big open roads. We take trips to Angeles National Forest, where you can do these incredible long drives, and when we have the time we take the car up there and go for a really long spin,” he says.

“I love driving and with the work that I do, there are always long journeys. We drove the length and breadth of Ireland with Donal’s Irish Feast, and I only wish I’d been driving a Range Rover Evoque back then.

“I love driving alone, in silence, or I stick on a podcast. It’s a great opportunity to switch off, especially on that long drive from Howth to Sandycove. My favourite travel companion has always been Sofie.

“We went to theatre venues around Ireland together for two years running, and Sofie, who is Swedish, knows the country better than most Irish people by now. It’s a lovely way to switch off and connect with each other, as there are less distractions in the car, and you can just focus on the road and the conversation,” he says.

Bull Island and beyond

Along the drive to Howth, Skehan stops in Clontarf, jumping out of the car to take in the vista that is Bull Island on one of those rare, glorious blue-sky days of late June.

I love technology and this is just amazing. It’s so slick. I use the touch screen to navigate my way to Sandycove

“I adore this place, Dollymount and Bull Island. You feel like you’re so close to the city, but you are in the heart of nature too. These are lovely places to go back to with Noah.”

It’s not long before he’s back in the car and off to his final destination, the place he grew up in, Howth. With his iPhone hooked up , he takes a call from Sofie on the car’s touch screen, letting her know he’s on route.

“I love technology and this is just amazing. It’s so slick. I use the touch screen to navigate my way to Sandycove. I also love the rearview mirror that can be flicked down to give you a clear view at the back,” he says, before using it to back out of the car park overlooking Dollymount strand. Arriving in Howth, he’s clearly happy to be home. “I feel so proud bringing Noah home here. It’s such a beautiful place and I see the magic of it and get why it’s such a top tourist destination. It’s one of those places you have to see when you come to Ireland. It’s also the place where I met Sofie, over 12 years ago. She was visiting from Sweden at the time.”

At just 19, the pair were waiting tables in the now closed Casa Pasta. They went on their first date to the Bloody Stream pub in Howth and the rest is history.

Having come to the end of his daily drive, he speaks of his other work commute, one that is becoming quite regular, too.

“Coming 6,000 miles, all the way from the west coast of America to Howth is a long journey, but one I’m so happy to make with my family,” he says.

Everyday Adventures is a five-part series of in-car interviews with in association with Jaguar Land Rover brand ambassadors as they take us to places that mean something special to them.

This week, TV food personality Donal Skehan returns from LA for a visit to his hometown of Dublin, and rediscovers some of his favourite places in the new Range Rover Evoque.

Every element of the new Range Rover Evoque, from flush door handles, to slimline headlamps, contributes to its refined design, while retaining the original’s instantly recognisable form.

The interior is also smartly packed with a contemporary suite of connectivity and interface technology including Apple CarPlay and Land Rover’s new ClearSight interior rear-view mirror, innovative new technology which provides an unobstructed view of the road behind you, regardless of rear seat passengers or objects.

The new Range Rover Evoque delivers a dynamic driving experience with exceptional Land Rover capability both on and off-road.

Visit landrover.ie to learn more about the luxury SUV for the city and beyond.