Huge skills shortages in a number of sectors 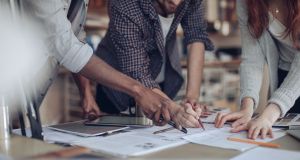 There is a dearth of architects and architectural technicians. Photograph: iStock

The Irish labour market has seen a return to pre-recession levels of demand for talent across all sectors, with 81 per cent of companies saying they are suffering from skills shortages, according to CIPD, the professional body for Human Resources and People Development.

Industries from construction to ICT, sciences to hospitality are all hiring, and they are finding it difficult to source the right people for the jobs.

“Worryingly for Ireland, there is a significant lack of available talent across all sectors and at all levels. In the early 2000s, typically this gap was filled by workers from eastern Europe, particularly in the service sector, but with the improvement in the economies of Poland, the Czech Republic and Slovakia, we are not seeing the same interest from those workers in Ireland anymore,” Colin Donnery, general manager of FRS Recruitment says.

Breaking it down sector by sector, Donnery says the construction industry is thriving and there is a view Brexit will contribute greatly to this, with companies looking to relocate here.

In construction, hiring lagged behind other industries in growth of jobs but it will see an increase of 14 per cent in 2018 (CSO), making it the fastest growing sector in percentage terms.

“The jobs within construction that are most in demand are site engineers, structural engineers and quantity surveyors. Dublin has still the highest demand but this year has seen growth in jobs in Cork, Limerick, Galway and the midlands,” Donnery says.

Tom Doyle of KPPM, which recruits solely for the construction industry, says he is seeing “huge shortages” as “every single type of project imaginable is happening in Ireland right now”.

“We’re going abroad to recruit and online is a huge tool to reach people across the globe. People don’t realise how busy it is and we need people to come back to help get this country back on its feet and to build it,” says Doyle.

“There are a huge number of non-nationals who want to come to Ireland to work in the industry but we are very closed to it. Certain standards have to be met in Ireland in relation to architecture. People are trained to a very high standard here with RIAI, and rightly so, but we need to look at opening the doors and offering some type of training. They’re well able to do the job but they just need to be brought up to our standard,” he adds.

In terms of ICT, the sector didn’t really experience the downturn of others from 2008, Donnery says, and there is huge demand for Java developers, DevOps and IT security with emerging roles such as machine learning and AI analysts, where there is likely to be consistent demand in the coming years.

“The Government backing the Techlife Ireland initiative along with Ireland being home to the European headquarters of most of the world’s biggest tech multinationals has made Ireland the destination of choice for international tech talent,” Donnery says.

Geraldine King of the National Recruitment Federation (NRF) says there are “no surprises” in relation to ICT, with the usual demand for highly skilled talent in this area.

“Big data and analytics roles may experience changes because of automation and artificial intelligence, meaning candidates in these areas may need to upskill to other areas. Gaming is at an all-time high, with a high demand for mobile developers. GDPR has also created a bigger demand for IT security roles,” she says.

The science sectors of pharma, medical device and food production have high demand for process engineers, quality engineers and production managers and these roles tend to offer a more regional choice of locations for candidates.

“The FRS Recruitment healthcare division works with many public and private hospitals and there is currently a huge shortage of emergency medicine registrars, paediatrics registrars, obstetrics and gynaecology registrars, with many vacancies for nurses, particularly in theatre and ICU/surgical roles,” Donnery says.

The Irish financial services sector employs more than 40,000 people and 2018 saw an increase of up to 15 per cent in live job vacancy numbers in this sector.

In relation to financial services, Brexit is providing “cautious optimism” for more jobs in this area, according to NRF president and chief operations officer of Sigmar, Frank Farrelly.

“Brexit uncertainty or clarification will have a big part to play on how the landscape shapes. With the demand for talent having hit close to critical levels in some specific areas in 2018, this will not only continue to put pressure on salary and benefit offerings, but will no doubt mean that the war for financial services talent will enter an unprecedented phase in 2019.

“The world of financial services is now a world of perpetual change, where innovation is exerting huge pressure on traditional business models. The implications for financial institutions from a cashless world, emerging payment rails, alternative lending and shifting customer preferences will have a huge bearing on the not-too-distant future employment trends across the industry,” he says.

Mary Connaughton of CIPD says companies that are struggling to retain talent are placing much more of an emphasis on internal skills.

“Companies are saying that employee turnover has increased in the past year. So lot more of an emphasis is being placed on upskilling, and profiling talent internally to see what they might have, or they are using employee contacts. Another approach is looking at different working arrangement – ie temporary contracts, agency workers, and more willingness to consider part-time or remote work. Employees therefore have more flexibility.”

Meanwhile, FRS Recruitment recently created the “Ireland is Hiring” initiative to try to attract back home Irish people who had emigrated during the recession. They organised a roadshow of recruitment events in Sydney, Melbourne and Brisbane and met more than 1,000 Irish people who indicated their interest in returning to Ireland to work.

Donnery says the most surprising aspect is that many Irish in Australia are not aware how much the Irish economy has improved and the amount of job opportunities available for them back home.

As part of the “Ireland is Hiring” initiative, FRS Recruitment will pay for the flight home of any Irish person they successfully place in a job with their clients. Food for thought in 2019.