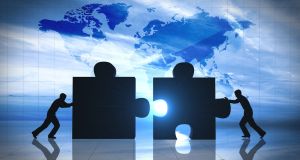 Deal-making against the backdrop of uncertainty, volatility and an increasingly complicated geopolitical environment is the new norm

The year 2019 marked a busy year in the Irish mergers and acquisitions (M&A) space, and this year is shaping up to show similarly strong activity. That’s the prevailing view of financial experts, who say the outlook is positive for 2020 with a healthy environment for M&A in Ireland. And that’s despite the reality of Brexit, an upcoming US presidential election, and the ever-growing threat of coronavirus.

David Widger, partner and head of corporate at A&L Goodbody, highlights the “mega-deal” of 2019, namely AbbVie’s proposed acquisition of Allergan for €75 billion. “We also saw the €10 billion merger of Stars Group and Flutter Entertainment, or Paddy Power Betfair.”

Mega-deals aside, there was a far greater number of mid-market deals, including HPS Investments’ acquisition of Arachas for €250 million, Star Capital’s purchase of ASL Aviation for €208 million, and Bank of China’s acquisition of Goodbody Stockbrokers for €150 million, says Widger.

“The bigger deals can skew the numbers a little, but it was a good year for M&A activity, particularly in the mid-market sized deals.”

Stephen Keogh, head of corporate department at William Fry, says that despite a global decline in deal-making in 2019, the Irish market continued to perform quite strongly.

“In fact it was one of the stronger markets in Europe. The biggest deal of the year with an Irish connection was the €1.8 billion joint venture between Hyundai Motor Co and Aptiv’s regarding Aptiv’s autonomous driving unit. The €1.5 billion sale of Green Reit was a close second in terms of size,” he says, noting that whispers persist that these mega-deals may have marked the top of the market.

“In term of the domestic market, the largest reported deal was probably the sale of Payzone, the consumer payments network, to AIB and First Data, which is a good example of banks in today’s low-interest rate environment seeking non-traditional ways of improving revenues.”

According to Alan Mahon, director in AIB Corporate Finance, the Payzone acquisition brings significant fintech capability to AIB, and further strengthens its digital agenda in a “post-open banking economy”.

Mahon says the introduction of open banking is driving consolidation in the fintech industry globally. “Ireland is central to this, demonstrated by the success stories of Payzone and the acquisition of Prepaid Financial Services (PFS) by EML Payments.”

He said Irish plcs continued to expand their geographic footprint during 2019 . “Uniphar, Smurfit Kappa, Kerry and Kingspan amongst others all made foreign acquisitions.”

Richard Duffy, director of corporate finance, BDO, agrees 2019 was a “strong year” for the Irish economy despite the considerable uncertainty over Brexit coupled with a marked slowdown in global activity.

“The overall environment for M&A is reasonably healthy for Ireland and the outlook is positive for 2020,” he says.

According to Duffy, deal activity in the mid-market space (i.e. deals of up to €250 million) will continue to be the cornerstone of the M&A market in Ireland.

“Increasingly we see private equity involvement in the mid-market space. This is, of course, important for Irish companies seeking exits and/or support to grow their business. Given the macro-dynamics, companies looking to scale should be considering M&A activity – this will help them build a company that is able to withstand risks and uncertainties in the markets.”

Duffy adds that from a seller’s perspective it is a good time to sell to maximise value, saying it is estimated that globally there is over $1.5 trillion in private equity available for investment.

M&A activity will be driven by companies looking to strengthen their businesses, particularly during periods of prolonged uncertainty, and Duffy predicts that companies of similar size will likely continue to combine in an effort to “better insulate themselves from macro shocks” and deliver growth by securing new customers and entering new markets.

“This will result in an increase in cross-sector deals in 2020 as companies expand their options and build resilience; while private equity firms look to do the same in their portfolios.”

He said technology would also play an important role. “Companies need advanced digital capabilities that they cannot replicate in-house in order to remain competitive or have transformational growth.”

According to Keogh, 2020 is off to a positive start in terms of Irish M&A activity with two landmark deals in January – the purchase by Google of Pointy and the purchase by Qorvo of Decawave.

“These are both great examples of local founders capable of building world-beating businesses, backed by Irish venture capital funds, and exiting at fantastic valuations. I think it is safe to anticipate a continuing trend of multinationals investing in Ireland, both organically and through acquisitions like these.”

For this and other reasons, he says it “seems reasonable” to remain optimistic for 2020. “Provided that neither our pending change in government nor global geopolitical forces lead to a major domestic shock, economic activity in Ireland will continue to be buoyant for the medium term, leading to continued growth in M&A activity.”

Finlay McFadyen, head of Investment Banking at AIB, cautions that Ireland’s open economy makes us “heavily dependent” on the state of the global economy. Yet, while global recession indicators were flashing in 2019, these seem to have abated recently. “The continued loosening of monetary policy and breakthroughs in trade discussions have given the global economy a boost at the start of 2020.”

The above economic outlook coupled with other deal-making fundamentals – such as low interest rates, large amounts of available capital, and high quality assets and companies coming to market – means experts are forecasting another strong year of M&A activity in Ireland, adds McFadyen.

“The Irish economy is still showing good growth even with Brexit. Ireland remains an attractive place to invest as the fundamentals of good business growth are there – economic growth, well educated workforce, an open market with attractive tax structures and an excellent network into the EU. Ireland is still seeing good levels of investment from the UK and US, but also increasingly from East Asia, so FDI is diversifying, which is a good thing.”

This is despite what Widger views as an “unusually large number of geopolitical forces” that could potentially impact M&A activity this year.

“These range from US trade policy, the US presidential election, how Brexit implementation unfolds and, of course, more locally, our own general election. The recent coronavirus also highlights how unanticipated events can significantly impact local or global economies.”

Duffy says deal-making against the backdrop of uncertainty, volatility and an increasingly complicated geopolitical environment is the new norm. “Investors have become accustomed to investing in such an environment and they have to invest. Funding is readily available.”