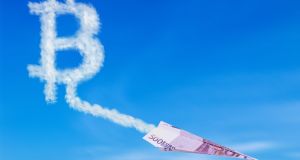 The impact of technology will be keenly felt as the sector begins to modernise, with blockchain and digitalisation of leases hopefully leading to further efficiencies and cost savings. Photograph: iStock

Pardon the pun, but trading in the aviation sector is about to experience some turbulence. The impact of technology will be keenly felt as the sector begins to modernise, with blockchain and digitalisation of leases hopefully leading to further efficiencies and cost savings, and alleviating the heavy burden of what is still a largely paper-based system.

Caroline Devlin, partner and co-head of aviation at Arthur Cox, agrees, saying change is anticipated “at a pace we have never seen before in the next five to 10 years”.

“Digitilisation is inevitable. In the area of aircraft ownership and management, the possibilities are endless,” she says.

The ability to use the basic concept of blockchain – being a secure unalterable digital record keeping system – to facilitate more convenient and efficient travel is an exciting concept, Devlin says. She explains that while blockchain has been somewhat tainted in recent years by being linked to cryptocurrency, “I believe we are on the cusp of really experiencing some of the efficiencies that it can create”.

One of these is GATS, or the Global Aviation Trading System, developed by the non-profit Aviation Working Group (AWG), which promises to transform the way in which aircraft owners, airlines, and leasing companies will acquire, own, lease and trade aircraft.

“A real tangible product is seen in the launch of GATS, which will be transformative in lease management in the future, and is a superb product of the AWG,” says Devlin.

“This initiative was set up by the top 10 aviation leasing companies, most of which are here in Ireland, as a way of dealing with the slow and cumbersome process of trading aircraft and especially trading aircraft where there are leases attached to them,” says Flood.

Aircraft is being traded a lot more frequently nowadays, largely because of the sheer volume of aircraft in the market. Yet the trading system remains antiquated and document-heavy, Flood explains.

“When we are working on an aircraft financing transaction, the amount of documents compared to any other structured finance deal is second to none,” she admits.

What GATS promises is to bring this process into the 21st century and digitise it, so that trading proceeds more efficiently and smoothly. GATS is essentially a digital platform that uses blockchain technology. It functions as an electronic ledger, so all stakeholders, whether they’re an aircraft leasing company or an airline, can log on and the change in ownership will be recorded electronically.

“If company A wants to sell an aircraft to company B, there is a huge amount of work in terms of the aircraft’s records. There have been some advances in terms of document management systems but they are just document repositories, the documents are still PDFs,” he explains. “You are talking about wading through pages and pages of data – it’s time-consuming and labour-intensive. There is no question that GATS will be helpful.”

“Any time you were trading an aircraft where it was already on lease to an airline like Aer Lingus, it meant you had to go out to your customer and tell them what was going on, even though it did not affect their lease. They still had to sign up to all of these amended documents which meant they still had to go back to their legal counsel to review them,” adds Flood. “The whole process became fraught with negotiation and delays.”

Certain legal requirements associated with this changeover mean aircrafts will now be held in trust, with trustees appointed, and this is where Intertrust comes into play. Griffith says they have been working closely with the AWG since last year in order to become an approved trustee for GATS in two of the three jurisdictions in which it will be rolled out – namely, Ireland, Singapore and the US.

“The platform won’t go live until the end of March but to facilitate this there are certain legal requirements that need to be put in place, including trustees as this will help the smooth trading of aircraft, because the trust won’t change as and when the aircraft are traded,” he explains.

O’Brien notes that Irish finance company Fexco won a fiercely competitive global tender process to develop the platform upon which GATS will operate. “This is really positive for Ireland as an aviation hub,” he notes.

Blockchain is also set to become an integral tool in the aviation trading sphere. Blockchain facilitates the integrity of transactions, and will eventually be utilised across all aspects of aviation trading, believes O’Brien.

“The letters of credit process [which guarantees payment] is a manual process and very time-consuming, so there will be a number of people putting letters of credit into blockchain,” he says, adding that putting technical records into blockchain would also be a significant move. “An awful lot of the value of an aircraft is in that paper, the technical records. So if you can give them that level of integrity and security with blockchain where you are utterly certain that every transaction is accurate and recorded and every maintenance is accurate and recorded and you can trace back the signature or the stamp of the engineer that did it, there is clear value in that.”

Aircraft leases also remain very manual, and there is now a big move towards “smart” or electronic contracts. Devlin explains that there have been recent developments, which should see a flurry of activity in this area.

“In November 2019, the UK Jurisdiction Taskforce published a legal statement on their views of the basics relating to smart contracts and cryptoassets. The paper confirms the view that smart contracts – being an agreement between people in the form of computer code – can be enforced, and that the usual principles of contract law can still apply to smart contracts,” she explains.

“Smart contracts are also connected to blockchain but companies are also looking towards machine learning and robotics, in order to take away that manual routine,” explains O’Brien. “This will help in not only getting the deal done, but in dealing with the aftermath of a transaction. It’s about the reality of having a dataset that is searchable and can be interrogated and accessed in an easier fashion, that will be really powerful.”