Yeats collection should belong to the nation

Highlights from the Yeats and family collection of art, letters and personal effects to be auctioned by Sotheby’s have been unveiled to the public at a special showing at the RHA in Dublin, ahead of the sale in London. Video: Bryan O'Brien 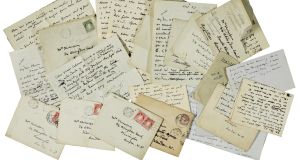 Letters included in Sotheby’s sale of items from the Yeats family collection.

Last week, I was visited by a Chilean friend who had just returned from a trip home to his family. He brought me a souvenir, a tile engraved with the image of a fish and a compass, which he had bought at the Pablo Neruda House in Isla Negra, near Valparaiso. While there he had also taken a photograph looking out from Neruda’s desk at the beach and Pacific breakers, a sight which offered a clarifying sense of this poet who lived facing the elements.

Next morning, I received an email from Sotheby’s about “Yeats: the Family Collection” (which returns to Dublin this week for a viewing at the RHA ahead of the auction on September 27th in London). It is an amazing collection: portraits of the poet’s father and mother and his brother and sisters are mixed in with his papers, correspondence and the household goods he lived among.

In this newspaper, Michael Parsons reported that the collection was first offered to the National Library, the National Gallery and the National Museum, which chose to purchase a selection of Yeats’s grandchildren’s inheritance of hundreds of manuscripts, images and objects.

But to click on the catalogue of the collection is to see how much has escaped these national institutions: a treasure trove has been consigned to an auction house. Perhaps no one joined the dots, but many items in this auction (alongside already-purchased, material such as the family library, the Yeats-Joyce correspondence and the Nobel medal) ought to be preserved for the nation rather than being delivered into private hands.

Yes, Yeats knew the price as well as the value of art: when the editor of The Irish Times rang him with news of the Nobel Prize, his response was: “How much?” Yes, at his most despairing, he knew culture is temporary, gone in the blink of an eye – of the 1920s “conflagration” of the culture he knew as a child at Lissadell, he wrote: “Bid me strike a match and blow.”

What an unutterable shame it would be if Yeats’s writing desk, which travelled with him from Galway to his three Dublin addresses, is sold into private hands. It is unfortunate that no one suggested to the Yeats family that Poetry Ireland, in its salubrious new premises, would be a better site for his desk and chair and sketches of the teenage poet reading, facing across Parnell Square to his “friends’ portraits” in the Hugh Lane Gallery.

Other countries understand the value of preserving writers’ material contexts

Would it not be a happy ending for the family dining table (bought along with the Encyclopaedia Brittanica with his Nobel Prize money) to end up in Sligo where Yeats’s readers and scholars gather annually? And for his Impressionist watercolours of Coole to adorn Thoor Ballylee, now that Coole itself is gone?

Who could think it better that these objects end up in the hands of a speculator, or a foreign university archive, or as a mere “collector’s item” in a private home?

This auction asks questions of the national culture Yeats knew, questioned and shaped: he was aided by benefactors, John Quinn, Lady Gregory and her nephew Hugh Lane among them, who worked to make new theatre and visual art and poetry available to anyone. Is that culture of artistic patronage still alive? The auction also asks a question of collection policies: is it time for a more co-ordinated approach to protecting Ireland’s literary heritage?

Germany’s department of culture funds literature houses which act as hubs for writer development, events and collections associated with writers; British university archivists work together to reclaim writer archives and writer museums proliferate; in Chile there are not one but three Neruda houses alongside centres celebrating Gabriela Mistral and Vicente Huidobro.

The value of preserving writers’ material contexts is well understood. Think of Emory University’s Seamus Heaney collection whose recent show used the poet’s desk as its centrepiece; or Proust’s preserved cork bedroom in the Musée de Carnavalet in Paris, the Hemingway home in Key West, the objects in Haworth’s atmospheric Bronte parsonage or Manchester’s Gaskell house.

Shouldn’t Ireland’s university archives, as well as organisations such as Poetry Ireland, be consulted, alongside national institutions, about the export of literary archives, archives which are crucial to understanding the roots and contexts of our artistic heritage, and which may foster new waves of Irish creative work?

If significant material returns to the living stream of working institutions, more people will be afforded the chance to see the world from Yeats’s point of view, to look over their desks and dream as he did, and to prove he was no crackpot when he wrote:

“The swan has leaped into the desolate heaven:

That image can bring wildness, bring a rage

To end all things, to end

What my laborious life imagined, even

The half-imagined, the half-written page;

O but we dreamed to mend

To afflict mankind, but now

That bitter winds of winter blow

Learn that we were crack-pated when we dreamed.”

1 Tyrone midwife on the cover of Vogue magazine
2 In six months we will be in the grip of a 1980s-style recession
3 Barack Obama urges those protesting in US to seize the momentum
4 Luke ‘Ming’ Flanagan bares his bottom half to European Parliament
5 Normal People: Full-frontal nudity was not its most radical feature
Real news has value SUBSCRIBE