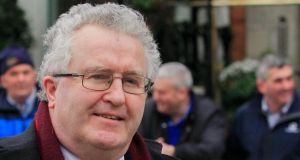 Mr Justice Seamus Woulfe: did not consider the gathering to be a political one since the Oireachtas Golf Society is “not connected to the Oireachtas”. Photograph: Gareth Chaney Collins

Former chief justice Susan Denham’s inquiry into the conduct of Mr Justice Seamus Woulfe in attending the Oireachtas Golf Society dinner in Galway last August concludes that the Supreme Court judge should not have attended the dinner but that calls for his resignation are unjust and disproportionate.

Her conclusion met with criticism highlighting the lack of accountability for judges and alleging this was an example of the elite looking after themselves.

A couple of points need to be made. First, the resignation of a Supreme Court judge is an entirely different matter to many of the other resignations that took place following the “golfgate” scandal. For example, Dara Calleary had to resign his position as minister for agriculture but retains his position as TD and his position in politics generally. The same is true of many of the other resignations. Resigning his position, however, would mean Woulfe would never exercise his role as a judge and possibly would never be able to practise law again. Perhaps there are parallels to be drawn with the resignation of European commissioner Phil Hogan but the point needs to be made that it is a very serious matter.

Nevertheless, public confidence in the administration of justice is also a serious matter and that is why this whole episode is so potentially damaging. Next year, the Judicial Conduct Committee of the Judicial Council will begin hearing complaints against judges and a whole mechanism providing for accountability and transparency will be established. At present, however, there exists no such mechanism. This is why the Supreme Court requested that the former chief justice carry out an inquiry – no other body was competent to do this and members of the Government and Oireachtas seemed to abdicate any responsibility on the matter, even though the ultimate responsibility of removing judges lies, under the Constitution, with the Oireachtas.

The issue with this form of non-statutory inquiry is that it has no basis in law and so if the report had produced negative consequences, it would have been open to Woulfe to challenge this by way of judicial review. Indeed, the fact that he retained counsel would indicate he was willing to take such a course of action if necessary. But as it happens, this will not be necessary because of the conclusions of the report.

The Judicial Council Act defines judicial misconduct as conduct by a judge “whether in the execution of his office or otherwise . . . [which] constitutes a departure from the acknowledged standards of judicial conduct . . . and brings the administration of justice into disrepute”. Until the Judicial Council publishes its guide to judicial conduct and ethics next year, this is the only guidance we have in relation to judicial misbehaviour. In considering Woulfe’s decision to attend the dinner, Denham focused heavily on the public health aspect and the propriety of a judge attending in such circumstances.

She was also of the view “that the advisability of the attendance by a member of the Supreme Court at a celebratory dinner, in a hotel in a public place, at a time of pandemic, required to be considered independently of compliance with the issue of Covid-19 regulation”.

Her report notes that Woulfe did not consider the gathering to be a political one since the Oireachtas Golf Society is “not connected to the Oireachtas” and is essentially a “society mostly for retired members, their friends and family for recreational purposes”. This was accepted in the review.

However, there remains a question mark over the propriety of this. Codes of judicial conduct in many other jurisdictions make it clear this is something which is not acceptable, particularly from someone who already has political ties, because it could lead to the appearance of bias. Furthermore, the internationally recognised Bangalore principles of judicial conduct, which will be used to draw up the future code of conduct for this jurisdiction, state that:

“The behaviour and conduct of a judge must reaffirm the people’s faith in the integrity of the judiciary. Justice must not merely be done but must also be seen to be done.

“A judge shall avoid impropriety and the appearance of impropriety in all of the judge’s activities.

“As a subject of constant public scrutiny, a judge must accept personal restrictions that might be viewed as burdensome by the ordinary citizen and should do so freely and willingly. In particular, a judge shall conduct himself or herself in a way that is consistent with the dignity of the judicial office.”

Judges, particularly in the Supreme Court, are often required to make difficult decisions on aspects of governmental policy and action so it is crucial that the judiciary is independent. The independence of the judiciary is a sacrosanct principle and Irish judges have a very strong record of independence so any perception of potential bias or even blurred lines between the judicial and political branches is potentially damaging to public confidence.

In fact, the practice of appointing former attorneys-general directly to the bench is also potentially problematic and is an issue which should be looked at in terms of creating some separation between the political and judicial offices. But that is another issue for another day.

The fact is that this issue has certainly affected public confidence in the administration of justice. However, the only possible consequences here were the removal or resignation of Woulfe and, as noted above, this is an incredibly serious matter. Of course, the problem is that lesser sanctions do not currently exist.

This whole situation highlights the deficiencies which have existed until now and means that the commencement of proper accountability mechanisms next year will be welcome, and will hopefully provide protection and transparency for everyone involved so that scenarios such as this one will be avoided.