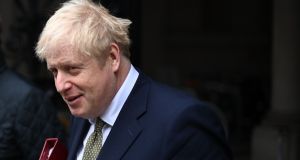 “New accommodation, new constitutional settlement, and co-operation rather than confrontation.” These are the strategies proposed to head off demands for Scottish independence by a political consultancy group advising UK cabinet office minister Michael Gove.

They were leaked to Bloomberg this week amid strong pressure on the UK’s union. The report covers the state of play, voter and polling trends, a strategy for the May Scottish Parliament elections and what do to in the event of a Scottish National Party majority.

“If the SNP builds on this momentum then the endpoint could be a full-blown constitutional crisis or a second independence referendum,” it said. An Ipsos poll shows 58 per cent favour Scottish independence, especially younger voters. Next year’s elections would provoke that crisis if counter-measures are not taken.

Brexit plays into this constitutional moment. Its very reality contradicts Scottish preferences to stay in the EU

The Covid-19 crisis adds to the momentum. One insider told the Financial Times there is “an almost colonial mindset” among some London ministers and officials dealing with devolved governments in Scotland, Wales and Northern Ireland and with Manchester and London mayors.

They are ignorant about the extent of devolution and local powers to deal with UK health issues – an attitude echoing those towards Ireland reported by many Irish observers.

Brexit also plays into this constitutional moment. Its very reality contradicts Scottish preferences to stay in the EU. That aggravation is hugely added to by the Conservative government’s Internal Market Bill. Its abrogation of international law on the Northern Ireland Protocol attracts international condemnation; but it is equally condemned for recentralisation in Scotland and Wales.

An authoritative report on the Bill by Scottish, Welsh, Northern Irish and English academics this week says: “We have never known relations between the Welsh and Scottish governments on the one hand, and the UK government on the other, to be as poor as they are today.”

This is largely because the Bill “prioritises the removal of potential barriers to trade at the expense of all other public policy goals”, by centralising decisions in London, so undermining devolved legal powers. Its authors want the legislation withdrawn and replaced by processes of prior dialogue and joint decision.

That echoes advice from Gove’s consultants about the need for a new accommodation and constitutional settlement. He is on the more gradualist wing of the Brexiteers and runs a negotiating track involving Northern Ireland parallel to the more prominent Barnier-Frost one which is now to intensify.

Gove must be pleased about that, since an EU deal would ease pressure on the UK’s constitutional order to allow a different and more co-operative strategy emerge with Scotland.

Gove’s consultants promise another report on an overall settlement. They hint such a “placation” plan would offer greater and more differentiated powers on finance and immigration instead of independence after the May elections, together with an understanding sought from the EU that Scottish membership might be blocked.

The report identifies “a vacuum of leadership within the [Scottish] unionist movement which is leaving the campaign [against independence] rudderless at a key moment”. The observation raises interesting perspectives on how Britain’s constitutional turbulence is seen from Ireland.

Presenting his Shared Island policy from Dublin Castle this week, Taoiseach Micheál Martin said a Border referendum was not on his government’s agenda over the next five years. Instead he offers a generous vision to deepen North-South and east-west dialogues and relations.

Martin says Boris Johnson agrees it is important to restructure Irish-British relations, including with matching funds. Unionists should not fear hidden unity agendas and are welcome to engage with the new space, as are northern nationalists who want a united Ireland, he believes.

The Ipsos poll finds 65 per cent of Scots want a referendum on independence within five years. Asked how Northern Ireland unionists can and should engage with their British colleagues confronted with Brexit and Scottish nationalism, the UUP leader, Steve Aiken, told an Institute of International and European Affairs webinar they need to re-establish confidence and support for the union together. He criticises London micro-management and supports deeper UK devolution.

In fact Irish and British politics are deeply entangled in these events. Their sheer pace threatens to outrun gradualist approaches, potentially leaving leaders and citizens ill-prepared for rapid change. Arguments for and against Scottish independence and Irish unity are linked politically by common problems.

Martin’s emphasis on strong east-west links answers Aiken’s demand that an “s” be added to the Shared Island policy. Unionism’s vacuum of leadership will surely deepen if it proves unable to argue these issues out openly and honestly with Scottish and Irish nationalism.