Why the media doesn’t care about climate change 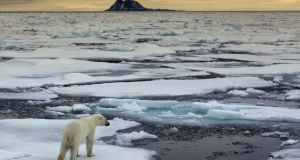 There is one conundrum related to climate change that has intrigued communications researchers for over 30 years. It can be summed up simply: given that climate change poses such a threat to our planet and species, why is it largely ignored by the media?

Ignored, I can hear you snort? But you can’t open a newspaper, browse social media or listen to the radio without hearing about melting glaciers or the upcoming Conference of Parties (COP21) climate change conference in Paris.

Research shows coverage of climate change peaks around international conferences and the release of Intergovernmental Panel on Climate Change (IPCC) reports, this article being a case in point.

Yet at other times it all but disappears, especially in Ireland. One survey shows it accounted for just 0.84 per cent of news coverage in The Irish Times between 1997 and 2010.

In 2007, European coverage of climate change was almost three times that of coverage in Ireland, at 138.2 stories versus 47.5 per title per month. In the late-2009, early-2010 period, European coverage had dipped to twice that of Ireland. Since then, the gap has widened again.

Another theory is that environmental problems have a natural attention cycle among readers. The stages are: the pre-problem stage, the alarmed discovery and euphoric enthusiasm stage, the realising the cost of significant progress stage, and the gradual decline of interest stage.

Climate change has been in the public eye for so long – it first gained widespread media coverage (as global warming) in 1988 – that it has probably gone through this attention cycle several times.

A key reason for the media’s relative lack of interest in climate change has to do with the nature of news itself. News likes unambiguous, discrete events, straightforward, one- off happenings rather than long-term social trends. And the media also likes negative news. Conflict and tragedy always make for good copy.

People generally equate levels of media coverage of a given issue with its importance, so low levels of climate change coverage have consequences in society.

The Paris climate change conference at the end of this month will, if previous experience is anything to go by, see a spike in media coverage of climate change. This is because a conference such at COP21 meets some of those news values discussed above.

It is a contained event and so the media can make better sense of it. Coverage is likely to focus on the politics of the conference – winner or losers – rather than the substance of the debate or outcomes.

However, the real challenge for the media will come after the delegates have left on December 12th. Will levels of media interest decline sharply like they did after the last major climate change conference in Copenhagen in 2009?