Why Ireland had to shut down for Storm Ophelia

The Government was wise to take the storm seriously, given the level of uncertainty

Fallen trees and other debris is being cleared from roads all over the country. Crews in Galway were up early removing rocks and seaweed ahead of opening up coastal roads. Video: Bryan O'Brien 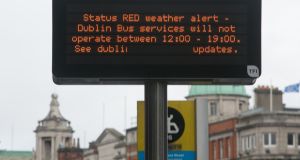 In only a few days, three hurricanes, Irma, José and Maria, passed through the Caribbean, following in the wake of Hurricane Harvey, which had struck the same region and the southern US only days before. And in that part of the world, the hurricane season is not over yet.

Most tropical cyclones in the mid-Atlantic follow a broadly predictable path that stems from a combination of “easterly waves” in the upper atmosphere, that start the spinning motion, and the Coriolis effect of Earth’s rotation, which together send the storms westward but curving to the north.

They can end up petering out somewhere in the middle of the United States.

But up to a quarter of the cyclones are erratic in their movements. They stall, amble around, back-track or go off course.

In 1998, Hurricane Mitch wandered around over eight central American countries and the result was devastating. Now we have Hurricane Ophelia, miles off-course and quite unusual, but by no means unique.

In fact, in 2006, Hurricane Gordon formed near the Azores, started off towards the Americas, changed direction, looped the loop and ended up in Northern Ireland.

Not only do big cyclones produce high winds, low atmospheric pressure allows the sea to mound up, and as it does so the winds drive it on land. In tropical areas, most deaths in hurricanes are drownings, although outside the tropics people are more likely to be killed by falling trees. Let’s not forget that there will be torrential rains, hence possibly flash floods, and perhaps even tornadoes, which are more common in the British Isles than one would imagine.

The two meteorologists who invented the eponymous Saffir-Simpson scale based it largely on the speed of rotating winds, and categories above two involve sustained winds of 100 knots, or more than 185 km/h, which are of course highly damaging.

In fact when the wind is really roaring, small increases in its speed can lead to disproportionately large increases in damage. So as a hurricane grows, wind speed creeps up and eventually damage can rocket.

Governments that are worth their salt know this and they know not to underestimate the power of natural forces. They also know that, no matter how good the forecast is, there are bound to be uncertainties. The extra-tropical storm that struck the south of England, and northern continental Europe almost exactly 30 years ago was a case in point: 18 dead and 15 million trees uprooted, yet the public warning process failed, to the eternal embarrassment of those who were responsible for it.

Since then, the study of atmospheric dynamics has cracked on, forecasting has improved, and governments have started listening to scientists, not only about things that are clear and certain, but also about the role of uncertainty in science.

In the US (and also recently in India), people in their millions have been told to evacuate when hurricanes are close to making landfall. If the hurricane veers away and the evacuation proves to have been unnecessary, there are always criticisms. People do not like to be inconvenienced unnecessarily. However, many recognise the virtue of behaving prudently. Next time, it may be very different. Hence, the idea of a “cry wolf” syndrome has not really gained traction.

A hurricane outside its area of genesis, such as Ophelia, slowly fading, can still be an awesome phenomenon as it crosses the coast. Trees crash down on to roads and buildings, trucks and caravans roll over, roofs are blown off and the contents of buildings are devastated, floods sweep cars away, vessels are lost at sea, and travel all but stops.

Some might regard the decision – such as that taken by the Government, to cease activities, close schools, shut roads and airports, and so on, as unnecessary “risk aversion”. Environmental risks can never be reduced to zero, so why do governments ever try? What if, in the end, the only damage is the scale of economic losses from activities curtailed?

There is a difference between risk aversion, usually an unintelligent desire to avoid risk regardless of the costs, and prudence, the recognition that things indeed could be bad. Nowadays, scenarios are widely used in emergency planning. They usually take into account both the best and the worst expected outcomes.

With regard to the latter, governments should take big storms seriously because some of their citizens don’t. For the most part, that is why we have deaths, the need to rescue people in difficulty and the other results of a storm emergency. In the end, none of us wants it to be worse than it has to be.