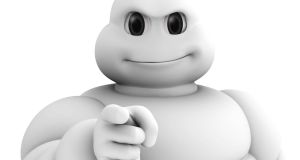 Michelin had a strict rule, a sacking offence in fact, that no alcoholic drink was to be consumed on the premises

When I was working for Michelin in Paris, helping to compile its Green Guide to Ireland, I found a strange puritanism that was almost, by definition, totally un-French, as well as an fanatical devotion to factual accuracy.

In 1988, Michelin tourist guides had decided to launch the first such guide to Ireland. Half a dozen writers, including myself, competed to find someone to complement the Michelin staff writer.

My chosen destination was Limerick and the task was to write a Michelin- style entry about all the tourist sights of the city. I went to Limerick, did my duty, wrote my copy and thought no more about it. A couple of months later, I had a phone call from Michelin to say that I was the successful candidate.

Ireland was divided up, with the staff writer being given the northern part of the island of Ireland to cover and me, the southern part.

My first assignment was Birr, Co Offaly. On the way there, on the October bank holiday weekend, 1988, the traffic was bumper to bumper from Leeson Street bridge to the turn-off for Birr.

The trips around the country intensified and the amount of mileage clocked up was astronomical. Exact mileages had to be returned to Michelin and they were equally precise about all other expenses; everything had to be carefully documented and receipted. Luckily, my wife Bernadette was able to travel with me on every assignment and bring her poet’ s vision to bear on everything. I made an arrangement with Michelin that I would be compensated only for my own expenses.

I was reminded of the apocryphal story of the Fleet Street reporter who came to Dublin years ago on assignment and when he returned to London, put in an enormously inflated expenses claim for the hire of a boat to take him to Usher’s Island in Dublin on numerous occasions. The accounts staff in London were oblivious of Dublin’s geography and paid without hesitation, in full. That reporter wouldn’t have lasted five minutes with Michelin!

The next discovery about Michelin was its absolute devotion to accuracy. I was soon receiving convoluted questions from the fact-checkers in Paris. An underlying question was always whether somewhere was vaut (worth) le détour.

Quite often, I had to go to Paris for editorial meetings at the headquarters of Michelin tourist publications, in the avenue de Breteuil. Friends remarked that I was just off to Paris on another jolly, but the reality was different. There, the meetings went on for hour after hour with a stern taskmaster, the editor, Mike Brammer, an Englishman who has spent so much of his adult life in France that he is more French than the French.

But in Paris, any thoughts of solace in the staff canteen were soon banished. Michelin had a strict rule, a sacking offence in fact, that no alcoholic drink was to be consumed on the premises. The canteen was well stocked with mineral water and soft drinks, another blow to my preconceived notions of working life in France!

It was a complete contrast to the trips we quite often made to the Champagne region to observe the progress of the latest vintage. There, in truer French tradition, any hint of abstention from alcohol was a grave and unforgiveable offence. A great friend of ours, François Bonal, a former French army colonel, who got a dream job on retirement as head of publicity for the Champagne houses, quite often welcomed us to the region with wonderful hospitality and free-flowing champagne.

Eventually, after nearly four years of arduous work, the Michelin Green Guide was published, in 1992. It had been such an exhaustive and exhausting experience that I had no wish to work further for Michelin.

But like every good restaurateur worth his or her salt, I soon realised how useful it was to have “Michelin” on my CV.

Another strange outcome, after the job was over, was that Mike Brammer and I became good friends and remain so to this day. He retired from Michelin a couple of years ago and now lives in a coastal town in north Brittany; we are planning our next meeting for later in the summer.

Michelin, in all its forms, remains an indelible part of my life, all watched over at home by a 30cm model of Bibendum, acquired in mysterious circumstances in Biarritz. But that’ s another story!