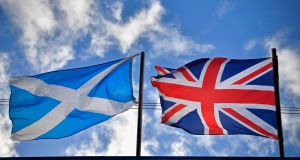 Gordon Brown’s dramatic interventions in the run-up to the first Scottish independence referendum in 2014 represented the high point of the type of unionism most deeply entrenched in the United Kingdom’s devolved territories.

It was a form of unionism that championed the idea of the United Kingdom of Great Britain and Northern Ireland as a multinational partnership, where internal differences are not only embraced but celebrated.

When Brown said Scotland should be “leading, not leaving” the UK, those right-wing newspapers that had so vilified him during his premiership lined up to cheer his leadership and vision.

Panicked by polling that suggested the pro-independence campaign might yet sneak a victory that most unionists had discounted as impossible, the main British party leaders signed up to the Brown-inspired “vow”.

Little wonder that Harry Potter author JK Rowling, a major donor to the Better Together campaign, could say: “I doubt whether we will ever have been more popular, or in a better position to dictate terms, than if we vote to stay.”

The idea that Scotland, which represents just 7 per cent of the UK electorate, could “dictate terms” to the remainder of the state – and in particular to the 85 per cent that is made up by England – was always fanciful.

However, few could have expected the hubris to be so brutally exposed as it was when David Cameron emerged just hours later to greet the No victory by declaring that now was time to introduce “English votes for English laws”.

This “Evel” is anathema to unionist MPs of whatever hue in Scotland, Wales and Northern Ireland. Brown saw and still sees Cameron’s post-referendum announcement as a great betrayal.

In truth, however, Cameron had little choice. Brown and his fellow Scottish unionists had overplayed their hand, generating a substantial backlash among English Conservative (though not only Conservative) MPs.

Even had he been so minded, it was a backlash that the then prime minister could simply not afford to try to face down in the months before an extremely challenging general election.

What is striking about the backlash generated by the Better Together campaign is that it was a backlash among a group who would all self-ascribe as unionists.

The point is that theirs is a unionism associated with English national sentiment, one very different in character to the one embraced elsewhere in the UK.

English nationalism is a curious concoction, combining a rather unlikely sense of grievance about how England was treated within the devolved UK with a sense of entitlement and even superiority about the UK’s place in the world.

But however improbable this combination may seem to those of us who live in England’s shadow, its potency cannot be gainsaid. English nationalism has played a key role in the two UK-wide votes held since.

In the 2015 UK general election the Conservatives made extraordinarily effective use of English fears about possible SNP influence over a minority Labour government.

The party’s opponents all testify to its effectiveness. Former Liberal Democrat leader Nick Clegg speaks of the “visceral fear” of the SNP that saw his party being swept away in its former strongholds in the southwest of England.

But it was about more than simply concern with the SNP. Nigel Farage speaks of how the Conservatives capitalised on “some quite vehement anti-Scottish sentiment” among the English.

It was, he said, a sense that “the Scottish tail has wagged the English dog in the most remarkable way”, with particular dismay at the way that Scots are “getting our money”.

In other words, it was not just about Nicola Sturgeon and Alex Salmond. Such a move encouraged some Scots to vote SNP. The Tories knowingly pursued a polarising strategy.

A strange form of unionism, you might say, but it makes more sense if you accept that theirs is emphatically not a union envisaged as a partnership of even near equals.

Theirs is rather a United Kingdom regarded, in essence, as a “Greater England”. Local differences with this Greater English state can be tolerated, but it is toleration within limits.

Such limits would have been breached, if not utterly violated had the SNP’s dominance of the Scottish political landscape led to meaningful influence south of the border.

The other face of English nationalism was to the fore in the Brexit referendum. While the rhetoric on both sides of the campaign was suffused by Britishness, the Britains being evoked were very different.

The Remain campaign operated as if Britain was a comfortably multinational and multiethnic society.

By contrast, the Leave campaign embraced a characteristically Anglo-British understanding of the UK.

The latter was rewarded with the overwhelming support of those who feel a strong sense of English identity. Those who felt British but not English voted overwhelmingly to remain.

Since the referendum Cameron has, of course, been replaced by that most English of politicians, Theresa May.

While parroting her commitment to the union, it is clear that hers is very much the English nationalist version of the union and unionism.

Her almost complete lack of interest in the views of the devolved territories was graphically illustrated in Welsh government minister and Labour Party politician Mark Drakeford’s extraordinary evidence last week in the House of Commons.

He painted a picture of utter Whitehall incompetence: late-arriving agendas, lack of papers and even last-minute uncertainty over the location of meetings. Even a tiny community council is more effectively run, in his view.

All of which is grist to Nicola Sturgeon’s mill. She has an alternative solution to propound: exit. For unionists in the devolved territories, however, it’s an utterly dismaying vista.

Not only is the unionism of the UK government not their unionism, it’s fundamentally incompatible with their vision of union.

And while most will likely respond to the existential threat represented by a second independence referendum by championing the United Kingdom even in its Greater England guise, some will not.

In Scotland, that group may be large enough to secure a majority for independence.

A result that would in turn leave unionists in Northern Ireland and Wales in an even more difficult and isolated position.

1 Dublin stabbing: Parking space was at centre of previous rows, gardaí told
2 People often ask me why I never want to go back to Ireland
3 Coronavirus: Ireland-Italy rugby match likely to be called off
4 Bank leaked my loan request to family who tried to rip me off
5 A cardiac problem that could strike at any time
Real news has value SUBSCRIBE