When the saints go marching in – An Irishman’s Diary on Patrick, Declan and Elvis

‘St Ailbe has a solid claim to be our national saint’ 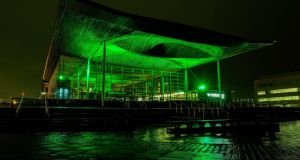 The Senedd, home to the National Assembly for Wales in Cardiff, is lit up for St Patrick’s Day. Photograph: Alistair Heap/PA

It’s St Patrick’s Day. But this year, it will be something of a damp squib, due to the coronavirus. Around the world, landmarks such as the Burj Khalifa in Dubai, the pyramids in Giza – even the Great Wall of China – may still turn green once more, to mark our national day and honour Ireland’s patron saint.

But for the second time in 20 years, St Patrick won’t be honoured with a parade in Dublin, this year because of the Covid-19 virus, and in 2001 because of foot-and-mouth disease.

I wonder if Saints Declan and Ailbe are looking down and with a feeling of schadenfreude. Both had sound claims to be our national saint.

Only a handful of our Ministers are abroad selling Ireland. But Donald Trump all but ignored the bowl of shamrock brought to the White House by Leo Varadkar.

But in the southeast of Ireland, in the Déise, some people may not be all that enthusiastic about honouring St Patrick year after year as we do. And with good reason.

Because local man St Declan was on the job, converting the Irish to Christianity, before St Patrick plucked his first shamrock from the ground.

Mind you, there is no reference to St Declan in the life of St Patrick, though the stories would suggest they were, at least for a time, contemporaries in the conversion business. But Patrick was hardly likely to give credence to any claim that he wasn’t the first Christian preacher in Ireland, was he?

Some believe that accepting others brought Christianity to Ireland before Patrick would damage his legacy. And Patrick himself may have shared that view.

But there is a fair amount of evidence to back up Declan’s claim to have predated Patrick in bringing Christianity to Ireland and that Patrick was well aware of the goings on in Munster and left it to the locals to do the converting there.

A 14th-century manuscript suggests that Munster was entrusted to St Ailbe by St Patrick.

St Declan was, at the very least, a close associate of Ailbe, who was Tipperary-born.

Both travelled to Rome where they were ordained as bishops.

And Declan, already a prince of the Déise tribe, is said to have got to work converting the people on his return.

It is believed that he set up his church where the 12th-century “cathedral” and round tower now stand.

His supposed burial site, the oratory, is nearby, as is the holy well.

While Dublin, and the rest of the world, celebrates St Patrick on March 17th, in Ardmore, Co Waterford, July 24th is the most important day of the year. It’s the Pattern Day, the word “pattern” coming from patron.

Three hundred years ago, Pattern Day in Ardmore was marked by excessive drinking and unruly behaviour, a tradition, some say, that is carried on in Dublin on St Patrick’s Day.

These days, July 24th is marked by cultural events and of course pilgrims visiting the various sites associated with St Declan. These include his stone. And a great story comes with it. It seems that when the saint was returning from Wales, he realised that he had left his bell behind on a rock on the shore.

He prayed for its safe return and then noticed the stone, or rock, floating beside his boat, with the bell on top.

He allowed the rock to lead the way promising to build his church where it landed. And it landed, of course, on the shore in Ardmore, where it remains to this day.

In 1839, Philip Dixon Hardy, writing about the holy wells of Ireland, observed more than 1,000 pilgrims at St Declan’s stone: “The devotional exercises were commenced at an early hour in the day, by passing under the holy rock of St Declan in a state of half-nudity. Stretched at full length on the ground on the face and stomach, each devotee moved forward, as if in the act of swimming, and thus squeezed or dragged their bodies through.”

St Patrick is our national saint and, I suppose, always will be, despite Declan’s claim and that fact that the weather on his feast day in July would likely be far better than in March, as indeed it might be for Saint Ailbe’s Day on September 12th.

Ailbe also has a solid claim to be our national saint. But it might be a bridge too far.

There’s a village in Wales named after Ailbe, only it uses the English version of his name. It’s called St Elvis. And tourists flock to St Elvis Farm to see the 5,000-year-old cromlech and the ruins of an old church there. Really.

I am named after our national saint.

But had Declan or Ailbe been recognised as maybe one of them should have been, this diary could have been written by Declan Murray.

Or even Elvis Murray.

That has a ring to it though, doesn’t it?