Artificial intelligence an ethical issue for believers and non-believers alike

Rite&Reason: Both sides owe it to humankind to explore an intrinsic value in what it truly is to be human 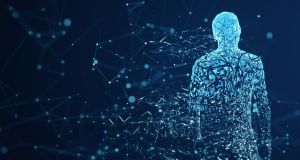 In a future world individual identity will no longer be defined in terms of any usefulness to society. Photograph: iStock

A few weeks ago, my friend the geneticist David McConnell wrote a stimulating article in these pages on the supposed chasm between science and religion, and how this is something to be bemoaned as it is almost certainly based on a fundamental misunderstanding.

As McConnell suggested, “science does not try to undermine religion – religion is simply irrelevant to science”. It was no surprise to me – nor would it likely be to him either – that I disagreed with very little of what he wrote.

What follows is therefore no attempt at riposte, but rather, I hope, a constructive consideration of some of ideas that he posited – in musical terminology, variations on a theme.

The Marquis de Laplace is remembered as a great scientist, but perhaps in some circles more for his supposed response to the Emperor Napoleon who had enquired as to where God came into his calculations on the mathematics of the universe. Laplace famously answered, “I had no need of that hypothesis”, and this seems perfectly reasonable to me.

It is not to restrict science to a subordinate position to suggest that in the broadest sense, science exists to discover how things happen the way they do, and in some areas – medicine being the most obvious example – to see if science can then “make things better” for humankind and beyond humankind.

If there is an ethical aspect to the uses of science it is with regard to the latter but not to the former.

Religion, on the other hand, seeks to explore if there is a significance beyond and behind a strictly scientific understanding of the universe and of humankind. Put crudely, science is about empirical explanation, whereas religion is about uncovering some further meaning (if indeed there is one to be uncovered).

This latter is not an easy project, any more than is science. Ludwig Wittgenstein, with his habit of reducing everything to useful axioms, noted that “the sense of the world must lie outside the world; in the world everything is as it is and happens as it does happen”.

I would therefore be as chary as would David McConnell with any idea that religion should ever attempt to trump science on the grounds that it has recourse to a higher authority; even less could I accept a “god of the gaps” philosophy that suggests that if something cannot be explained, the explanation must lie in the existence of God.

I have to accept that at the time of the Renaissance, the institutional church had no idea how to cope with a new approach to reality that placed the human person at the heart of enquiry and discovery, the origins indeed of the idea of “humanism” which was not then necessarily antagonistic to religious faith.

Not knowing how to cope with this new humanism, the church (as it so often does in such situations) sought to extirpate the fresh menace, and there were indeed many victims.

This should not, however, force the modern humanist into assuming that the only “faithful” Christian understanding of the scriptures is a wholly literalist one. From within the Christian tradition, an Augustine or Aquinas (or for that matter a Luther or Calvin) would certainly have believed the scriptures as inspired by God, as “God-breathed”.

They would, however, have been utterly mystified by a modern-day literalism – itself a late 19th and early 20th century innovation somehow conceived to defend Christianity against science – which would read the scriptures only as monolithic “fact”.

One of the pleasures of being Archbishop of Armagh is that one becomes (with appointment as archbishop) ex-officio chair of the Armagh Observatory and Planetarium.

The observatory was founded late in the 18th century by a previous archbishop, Richard Robinson, who was fascinated by the work of the pioneering astronomer William Herschel, and wished to place Armagh at the forefront of such scientific exploration.

Robinson saw religious conviction and the encouragement of science as complementary. For Robinson, science did not exist to prove God’s existence. He could see, however, that science might serve to enrich religious belief.

The motto of the observatory is taken from the Book of Psalms – “The heavens declare the glory of God”; the heavens do not prove God’s existence but, looked at in a certain way, they show something awesome that for some will reflect a divine glory.

A potential shared ground that must surely be explored between a religious belief system and an atheistic humanism that can finally learn to respect one another, is where an ethical commonality might seek to explore what the human person is to be in a future world where individual identity will no longer be defined in terms of any usefulness to society.

A self-learning computerisation, combining with almost limitless and instantaneous connectivity and vast robotic abilities on a scale that few of us can begin to grasp, will change the face of the Earth at incremental speed, allying itself to the reckless human destruction of the natural resources of the Earth.

Atheistic humanists and religious believers alike surely owe it to humankind to explore – from their differing perspectives – an intrinsic value in what it truly is to be human.