What sort of Europe does Ireland want?

World View: Citizens' dialogue is part of the process of re-examining our bond with EU 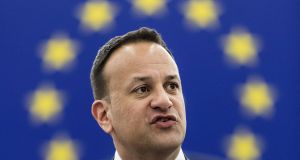 Eighty-five per cent of Irish people have a positive view of the European Union. Fifty per cent trust it compared to 38 per cent who do not, and 53 per cent think their vote counts in it compared to an EU average of 44 per cent.

They believe the main challenges the EU faces are unemployment, terrorism, migration and social inequalities. They are impressed mainly by its economic power, standard of living, good relations between its member states and its respect for democracy, human rights and law. Compared to the 27 other members, Irish people see housing and health as by far the most important issues facing them nationally, well ahead of most other states.

These figures are taken from Eurobarometer polls on the future of the EU and its current state last autumn. They make an instructive background to the growing national debate on where Europe should go and how it should develop being stimulated by the Government alongside the much more intense discussion on Brexit.

Now we are into the second stage of the Brexit negotiations, there is a growing awareness that not all the other members are as directly concerned with it as we are, that many interests will shake out in coming months, that reciprocity as well as solidarity will be called on as Ireland responds to these challenges and that policy trade-offs may be involved.

Some of these positive attitudes to the EU reflect Irish voters’ exposure to public deliberation on these issues. Brexit looms large here, as many more sectors research and discuss its probable impacts and now make links to wider European aspects of a rapidly changing picture. It is difficult to measure public preparedness and capacity to handle such issues, but comparatively speaking Ireland seems in a good position.

The Citizens Assembly has added a valuable new deliberative dimension to Irish democracy, on abortion, climate change, ageing and referendums. Ireland is relatively experienced with that form of direct democracy, not least on EU matters.

The decisive shifts of view registered in the assembly on abortion producing the proposal that women should have a right to choose within the first 12 weeks of pregnancy were echoed in the Dáil’s committee and now command widespread public support in polling.

It dramatically confirms how attitudes can change when hitherto unknown information – in this case women’s actual experience and behaviour – is clearly set out and debated. Similar shifts were seen in the 2016 referendum on same-sex marriage.

Coveney says Ireland wants a union of sovereign nation states, not a united states of Europe

The future of Europe debate is more diffuse and remote yet potentially just as impactful. Much depends on how it is stimulated and articulated by political leaders. They have made a good start since the Government launched its campaign last November.

Recent speeches by Taoiseach Leo Varadkar, Tánaiste Simon Coveney and European minister Helen McEntee identify the issues, rank them and indicate the Government’s policy. A citizens’ dialogue to be aired at public meetings will culminate in a final session on May 9th. Their contributions and others are readily available online.

Varadkar told the European Parliament Ireland is committed to EU membership, wants to help shape the debate and is willing to pay more for agreed policies. He supports cohesion funding for poorer members in central and eastern Europe, favours banking and capital market union and more integration of the single market in services as well as the Gothenberg social Europe initiative.

Defending Ireland’s low corporate tax regime, he denied it is a tax haven. He is for greater Irish participation in security and defence structures within continuing neutrality, and wants to see a Marshall plan for Africa. He supports a common list in next year’s European Parliament elections and the lead candidate system that gave us Jean-Claude Juncker as commission president in 2014. Coveney and McEntee echo these priorities. Coveney says Ireland wants a union of sovereign nation states, not a united states of Europe.

In a radical speech going to the social democratic and Keynesian roots of European integration last week at the launch of DCU’s Brexit Institute, President Michael D Higgins added an historical dimension to this debate. He questioned its recent narrowing focus on neoliberal economics, warning this could undermine its appeal to ordinary citizens.

It is a contested field politically, with its critics saying the EU talks enlightenment and peace but practises austerity and prepares for war. Domestic and European issues are increasingly entangled in these debates, making a well-informed deliberation all the more necessary.