What happened in Bungalow 3: How the law must change 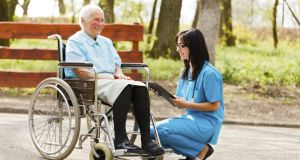 ‘It is impossible to guarantee that those with disabilities in receipt of services will not experience abuse. However, well-resourced services provided in the community near a person’s family and friends minimises the scope for abuse.’ Photograph: Getty Images

The abuse of people with disabilities identified in RTÉ’s Prime Time investigation is unsurprising. The State has historically outsourced the provision of services for those with intellectual disability to voluntary bodies and had little interest in inspecting or ensuring quality services and respect for the person’s human rights.

The investigation confirms that there is inadequate regulation of services and a lack of accountability in the management and delivery of these services.

It also highlights the failure of successive governments to repeal and replace the wards of court system based on the Lunacy Regulation (Ireland) Act 1871; a failure that puts older people and those with disability at increased risk of abuse.

The Health Information and Quality Authority (HIQA) was established in 2007 following an RTÉ investigation into substandard care at Leas Cross Nursing Home. HIQA’s mandate has since been extended to include inspection of residential services for those with disabilities. However, the Prime Time programme indicates the new regime of inspection is inadequate in protecting persons with disabilities from abuse.

In England in 2011, a BBC Panorama documentary reported on Winterbourne View Hospital where staff members were shown to have abused a number of patients. The Care Quality Commission HIQA’s English equivalent was found to be lacking, with previous inspections failing to identify abuse. The Winterbourne View scandal led to recognition of the need to reduce the number of people with challenging behaviour in hospitals and in larger residential care centres. The British department of health in its response recognised the right of those with disabilities to be given the support and care in a community-based setting near their family and friends.

In Ireland, the wards of court system is the current and exclusive mechanism for managing the affairs of those considered to be lacking decision-making capacity. Wardship is archaic and unresponsive to the needs of those caught up in the system and is recognised as violating the human rights of people subjected to it.

Restrictions on legal capacity (the right to have rights and exercise rights) has implications for all decisions about one’s life – where to live, what to buy, who to be friends with and how you spend your day. It is well established that institutionalisation of people with disabilities has not resulted in better protection from abuse.

The available research indicates the risk of abuse is exacerbated by institutional cultures, regimes and structures in which carers have low skills, status and pay and where there is opposition to change. The World Health Organisation in 2011 reported that those with disabilities are at greater risk of violence than those without disabilities. Abuse against people with disabilities has been reported to be four to 10 times greater than abuse against people without disabilities and those in institutional settings are at greater risk of abuse. The Prime Time programme also highlights the need to develop personalisation in disability support (eg, direct payments, personal budgets, individual budgets). Personalisation facilitates a person making decisions and becoming involved in shaping services they receive. Personalisation is empowering and ensures greater accountability of service providers.

Enactment of the Assisted Decision Making (Capacity) Bill 2013 will be an essential part of better safeguarding those with disabilities from abuse. The Mental Capacity Act 2005 in England specifically provides for an offence of ill-treatment or neglect. Conviction of the offence in England can result in the imposition of a prison sentence of up to five years.

A similar provision is included in the Assisted Decision Making (Capacity) Bill 2013, which if enacted would impose on conviction a fine of up to €50,000 or imprisonment for a prison term not exceeding five years, or both.

However, a major shortcoming with the Assisted Decision Making (Capacity) Bill 2013 is its failure to introduce a system that safeguards the deprivation of liberty of people in residential services. Thousands of people with intellectual disabilities living in residential services across the country are at risk of deprivation of liberty and coercive and restrictive practices without any independent and regular oversight.

This is a clear violation of Ireland’s obligations under the European Convention on Human Rights. This significant omission in the legislation means that the new law is vulnerable to challenge before the Irish courts and that potential human rights abuses will continue to go unchecked.

There are difficulties in prosecuting crimes committed against those with disabilities. Research from the Irish Council of Civil Liberties shows victims of crime who have disabilities experience marginalisation in the Irish criminal justice system.

It is impossible to guarantee that those with disabilities in receipt of services will not experience abuse. However, well-resourced services provided in the community near a person’s family and friends minimises the scope for abuse. The Winterbourne View scandal in England resulted in the allocation of increased resources for additional inspectors, which facilitated more frequent inspections. Inclusion of experts on HIQA inspection teams would enhance the effectiveness of its inspections. The investigative journalism of the BBC and RTÉ highlights the degradation and distress that can be visited upon people receiving services. Robust regulation, creative inspection and law reform is essential in checking the power and control exerted by services. Dr Charles O’Mahony is a lecturer in the School of Law, NUI Galway. He was formerly the legal officer on Amnesty International Ireland’s Mental Health Campaign.