What are Russian bombers doing in Irish airspace? 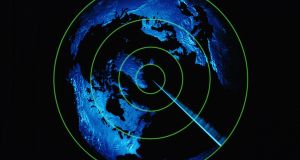 The rapid growth of the Russian embassy in Dublin suggests that Ireland is now seen as a growing priority for Moscow.

The entry into Irish-controlled airspace by Russian air force Tupolev TU-95 “Bear” strategic bomber aircraft last week was unsurprising. We have been here many times before. In 2017 the Royal Air Force scrambled Typhoon combat aircraft from its Quick Reaction Alert (QRA) stations to respond to another sortie by Russian strategic bomber aircraft that skirted close to Irish sovereign airspace, which extends to 12 nautical miles off the Irish coast.

Over the last decade Russian bombers have flown a series of provocative missions close to Ireland’s northern and western seaboard – on occasion skirting or even entering Irish airspace. An obvious question arises: why would Russia seek to provoke a neutral country like Ireland?

The principal reason is that, from a Russian perspective, Ireland is a significant piece on the geopolitical chessboard. Situated between two of Russia’s principal adversaries, the United States and the UK, Ireland lacks the air defence capabilities to deter or defend against such provocative sorties into its airspace. The Russian air force knows that it can approach or even enter Irish airspace with far less immediate and serious consequences than if it did the same to other north Atlantic countries such as Iceland where there is a Nato air policing mission – or Norway, which has a well-resourced air force capable of quickly intercepting suspected incursions.

A lack of capability means that the Russian Air Force can test RAF response time and the extent of British-Irish air defence co-operation – useful intelligence for the Russian military. The Russians also hope to stretch RAF resources. The UK has participated in Nato’s Icelandic air-policing mission and is also an important contributor to the Baltic mission over Estonia, Latvia and Lithuania. It has no QRA stations in Northern Ireland; the RAF deploys Voyager air-to-air refuelling aircraft from RAF Coningsby in Lincolnshire on the east coast of England to ensure that its Typhoon aircraft can monitor Russian long-range sorties off the west coast of Ireland.

The Government must now consider what response, if any, it will offer to this latest provocation. Russian incursions may not only be wounding to Irish sovereignty. They also carry a potential risk to life. Russian military intelligence aircraft frequently turn off their transponders in an attempt avoid detection, a tactic which could have resulted in a collision with a Scandinavian Airlines civilian aircraft in 2016.

Even without transponders, Russian air incursions are arguably more detectable than other Russian intelligence activities. The Royal Navy has reportedly monitored Russian submarine activity, including the nuclear-powered Akula-class submarine, in the Irish Sea, which has added to growing concerns about how to protect UK and Irish critical national infrastructure including transatlantic fibre-optic cables that lie in Irish coastal waters. The ability of the Irish Naval Service to deter and detect maritime intelligence gathering is extremely limited.

Russian interest in Ireland also extends to beyond the more traditional military theatres of sea and airpower. The rapid growth of the Russian embassy in Dublin suggests that Ireland is now seen as a growing priority for Moscow – in itself unsurprising given Ireland’s emergence as a global communications and technology hub. Meanwhile, the lack of cyber “top cover” in the form of an Irish signals intelligence service means that Irish businesses and multinationals are vulnerable to cyberattack from Russia.

The Government is drafting the State’s first national security strategy. This is a welcome first step towards acknowledging significant 21st-century challenges to Irish sovereignty. With the advent of 5G telecommunications and artificial intelligence, small states must think carefully about how they can secure the intellectual property and personal data of citizens and corporations. Irish sovereignty or neutrality means little to those who wish to gain an intelligence advantage in this era of hybrid conflict.

In the short term, Ireland will continue to rely upon the RAF to deter and monitor Russian or other aircraft that enter Irish airspace without permission

The new national security strategy must also consider what policing Ireland’s airspace and territorial waters should look like in the future. European air defence is becoming increasingly co-operative – the Nordic countries’ air forces train and deploy together, while the Netherlands, Belgium and Luxembourg jointly patrol the air space of the three countries.

In the short term, Ireland will continue to rely upon the RAF to deter and monitor Russian or other aircraft that enter Irish airspace without permission. There is no treaty that spells out such a formal defence relationship, but an operational reliance on the UK is obvious. In the medium to long term it is difficult to countenance the State developing the expensive air defence and training systems to police Irish airspace alone. Ireland’s natural security partner in terms of geography is of course the UK. Is it possible that historical and political sensitivities might be overcome to bring about an RAF-Irish Air Corps all-island joint air policing mission in the future? For now, as the Russian Air Force could tell you, there is very little prospect of anything of the kind.

Dr Edward Burke is director of the Centre for Conflict, Security and Terrorism at the University of Nottingham