Should Ireland fear a perfidious Albion? 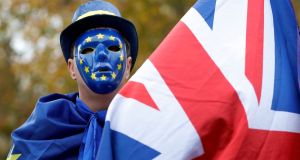 The UK side is ill-prepared, divided on objectives and seeking to use Ireland as a bargaining card in the wider negotiations on trade and market access. Photograph: Kirsty Wigglesworth

The Irish question is back in British politics. Next month the European Union must decide whether sufficient progress has been made in the Brexit negotiations to move on to the next phase of talks. Should Ireland veto an unsatisfactory UK offer on Northern Ireland’s future relations with the EU or would that prejudice an acceptable deal at the end of the talks?

It is as fine a call as any in the history of Irish foreign policy. The decision requires an assessment of the balance of bargaining power between the EU and the UK, of Ireland’s comparative leverage in this phase of the negotiations, and of the likely effect of an Irish veto now on future Irish-British relations.

Irish diplomacy did exceptionally well to have the Northern Ireland issue inserted as one of three issues on which progress would have to be made in this first phase of the Brexit talks. Along with the divorce bill and citizenship rights, the EU seeks clarity on the UK’s plans to keep the Irish Border open for people and goods even though the British government has unilaterally ruled out staying in the single market and the customs union. Its offers so far have relied on unconvincing assurances predicated on an unrealistic final goal to achieve a tailor-made outcome.

The EU’s demand that there should be no regulatory divergence between future EU and UK policies which would disrupt the all-island economy or undermine the peace process in Ireland is based on extensive research showing how deeply embedded these are in EU agreements and funding. Some 142 sectors are affected, ranging from health to agriculture, food , energy, tourism, energy and sport.

The UK side is slow to respond because it is ill-prepared, divided on objectives and seeking to use Ireland as a bargaining card in the wider negotiations on trade and market access to come in the next phase of the negotiations.

The balance of bargaining power is tilted against the UK because the supply of solutions on the EU side outweighs demands made by the UK for a bespoke outcome, according to the Swiss political scientist Frank Schimmelfennig. He argued at a seminar in Norway this week that whereas the UK could more easily negotiate internal differentiation or opt-outs from EU policies while it remained a member state, since others have an incentive to keep it in, it becomes much more difficult to do that when it has decided to leave, raising the spectre of disintegration for those who stay.

Those most affected, like Ireland, now have more bargaining power. They also have more leverage at this stage of the negotiations than they will in the next, wider stage when many more national interests will shake out. The British anticipate this will give them opportunities to divide the EU27. Their strategy raises the historical perspective of perfidious Albion dividing Europe in pursuit of a balance of power from continental hegemony. Their approach is more visible now to a united EU side. One must ask whether in their present state of political disorganisation and diplomatic isolation the British government is capable of perfidy.

The fear they might be capable of perfidy animates the current debate on how to get them to agree written guarantees about an open border in next month’s EU summit conclusions. These decisions are made by consensus, so that Ireland has a continuing veto on the outcome in the next phase, but less leverage.

Ireland also has a deep interest in securing a deal at the end which will preserve trade both ways with the UK, and cannot expect to conclude it now. It may also be necessary to work bilaterally with London on the North to bring jointly agreed solutions to Brussels, which needs goodwill and trust. Both are now in short supply.

The UK has reached a key moment of clarification about the kind of flexible and imaginative outcome it wants from the Brexit talks. Many possible solutions have been put forward for the North’s unique problems, ranging from full or partial inclusion in the single market and the customs union and where to place Border controls, to distinct treatment like other small territories.

Trust and goodwill can be restored by a British willingness to give guarantees in writing to conclude this stage of the negotiations. Unless they do so, the Irish Government should insist that sufficient progress has not been made, the effect of which would prevent them moving on until next year.

1 President Higgins says British must face up to their history of reprisals
2 Wife not entitled to deceased husband's entire estate, High Court rules
3 Life in Level 3: What will happen under new restrictions in Dublin?
4 Coronavirus: From midnight Dublin will move to level three until October 10th - Taoiseach
5 Coronavirus: Public health experts considered idea of moving Dublin to Level 4
Real news has value SUBSCRIBE